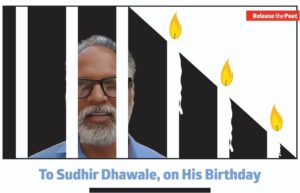 Sudhir Dhawale, a Dalit activist, writer, journalist, and editor of a Marathi magazine called ‘Vidrohi’, was arrested by Pune police on 6 June 2018. He was arrested previously in 2011 for 40 months, for the same reason he has been arrested this time – purported links with the Maoists. Dhawale, previously an activist of the Republican Panthers Jaatiya Antachi Chalwal, was involved in planning and execution of the Elgar Parishad, where he tried to bring activists and leaders from across political spectrum together to speak out against the Hindutva fascist regime.
Today, he spends his birthday in the infamous Taloja Jail of Mumbai.
#ReleaseBK16
#ReleaseAllPoliticalPrisoners
#Release_the_Poet