They were Accused of plotting to overthrow the Modi government – The evidence was planted, a new report says

Key evidence against a group of Indian activists accused of plotting to overthrow the government was planted on a laptop seized by police, a new forensics report concludes, deepening doubts about a case viewed as a test of the rule of law under Prime Minister Narendra Modi.
An attacker used malware to infiltrate a laptop belonging to one of the activists, Rona Wilson, before his arrest and deposited at least 10 incriminating letters on the computer, according to a report from Arsenal Consulting, a Massachusetts-based digital forensics firm that examined an electronic copy of the laptop at the request of Wilson’s lawyers.
Read more

Computer of Rona Wilson was compromised, malware planted from outside: US Forensic Firm report

The report was prepared by a foreign digital forensics consulting company appointed by the lawyers of Rona Wilson, accused in the Bhima Koregaon case.
… Massachusetts-based firm Arsenal Consulting was appointed by Wilson’s lawyers to analyse the electronic evidence seized from his home by the Pune Police in 2018.
Read more 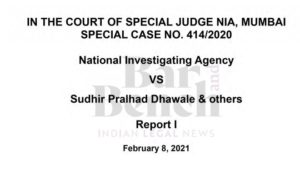 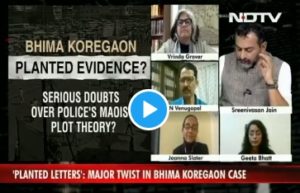 The report found that an attacker used malware to infiltrate activist Rona Wilson’s laptop before his arrest, and deposited at least 10 incriminating letters.
Key evidence against a group of activists and intellectuals, who have been arrested in the Bhima Koregaon case, was planted using a malware on a laptop seized by police, a new forensics report has found, The Washington Post reported.
Read more

Investigating agencies have used these letters to implicate Wilson and 15 other rights activists arrested in the ongoing Elgar Parishad case of 2018.
For at least 22 months before the Pune Police had raided activist Rona Wilson’s residence in New Delhi and arrested him, a cyber attacker had allegedly gained access to his laptop and planted at least 10 incriminating letters on it.
Read more