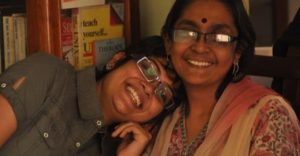 Last Saturday I tried to go to Byculla Jail for a mulakat with Maa but was denied. I was outside the jail waiting for 6 hours !!(I was there from 12.00PM to 6.00PM). They denied me mulakat because I had not come with the verification from the local police station that I am her daughter. Our surnames match and my Aadhar card clearly states that I am d/o of Shoma Sen. Previously I was allowed to meet her on 4-5 instances. I kept telling them that I have already done mulaquat before and that this verification is not a simple process, its taking time. I just wanted to inform my mother that my grandma, her mother-in-law had passed away. But they just kept me hanging there the entire day. I wanted to speak to Superitndnt and he just walked past me and again I waited for 2 more hours for him to get back after his lunch break which lasted from 1.00PM to 4PM. Can you believe ?
In the end when I managed to speak to the Suprtndnt the mulaquat timings were over. So, all in all it felt like I spent one entire day in jail, literally, though only standing outside the entire time. After I got home the mental and physical trauma left me sleepless, I couldn’t sleep till 4.00 AM. Even last night I woke up in the middle of the night with anxiety and palpitation. All that was going on in my head in loop was, what did I do wrong ? Where did I go wrong ? It is not my legal right to meet her weekly as her daughter? So why are the jail authorities harrassing some of us only who are family members of people charged under these special laws like UAPA or MCOCA. And this is especially after one person gets bail in the case. It is nothing else but pure harrasment of family members of those jailed. Even lawyers are going through similar stress when they go to meet our family in jail.
Who makes/changes these rules overnight? How is it so easy for them to make these changes in jail rules post lockdown. I am left with no understanding but just this that they don’t want the family members seeing them also, now. We are in a state of complete lawlessness.
This is how our judicial system punishes a person and their family without trial, without any proper evidence to prove their guilt but the process has itself turned into a punishment for three years now, both Ma and us (me and my father) have been going through this time again with jail visits.

Also read: In India and Around the World, Prisoners’ Rights Violated During Pandemic: Report (March 2021)