The Targeted Silencing of the Trinity of Thinker, Student, Reporter

Academia and journalism are intertwined. Both create and question knowledge, both demand a critical engagement with society, and both have a distinct interface with the public.
What is more, journalism and academia routinely draw from – and contribute – to the other. In a conversation carried by The Wire (‘Watch | The State of India’s Academic Freedom’, March 25), reference was made to the elements that constitute academic freedom…
Courageous individuals who stood up and spoke out felt the full force of a vengeful state machinery. If we are to consider the Bhima Koregaon arrests, four of the 16 people put behind bars were formally attached to universities. Anand Teltumbe, a former IIT professor, was a management professor at the Goa Institute of Management; Shoma Sen, the head of the English Literature department, Nagpur University; Sudha Bharadwaj, was visiting professor at the National Law School, Delhi; Hany Babu, was professor of language and linguistics at Delhi University.
Read more 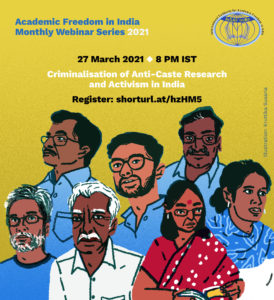 By International Solidarity for Academic Freedom in India (InSAF)

Anti-caste academic research and activism in India are increasingly threatened with criminalisation and surveillance from the state: from the arrests of academics and students to the militarisation of campuses, from the banning of books, plays and film screenings to the censorship of activities deemed as detrimental to the reputation of the government. The persecution of academic-activists in connection with the Bhima-Koregaon violence is a case in point.
Other examples include the specific targeting of anti-caste academics, in particular academics from Dalit and Bahujan backgrounds. Critics of corporate-friendly policies and actions of the government, public intellectuals who take the side of the poorest rural communities and join their struggles against dislocation, land expropriation and ecological destruction, are also regularly attacked and threatened.