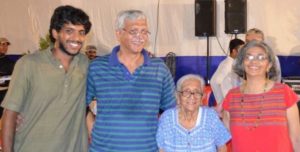 Yesterday was my father’s birthday. For a third year he spent it in a crowded jail and for a second year in a row he did so under the serious threat of a pandemic out of control. The threat seems far more severe this year and he, now aged 64, still very much falls in the category of vulnerable people. In the absence of an individual, memories are what we tend to hold onto and so I thought of sharing a memory from his earlier birthday in prison in 2019.
My uncle and I went to Yerwada Jail in Pune for a jail mulakaat. Jail mulakaats are less preferable to me as compared to court meetings as they are done through thick layers of glass over a phone in a small crowded room with the cacophony of several other visitors each trying to get their thoughts across to their loved ones in the limited time available (10 minutes, 15 if you got lucky). Court visits allow for more prolonged conversations and also the joy of small physical interactions. However, as with most things in this case, we did not have a choice, and so made our way to Yerwada for the mulakaat.
After saying our initial hellos, I took a step back and my uncle spoke to my father as only one person could speak due to there being only one phone. While seeing my father talk to my uncle behind that thick sheet of glass, I could not help but feel a lump in my throat and my eyes well up as I saw him in that bleak situation. I consider birthdays to be very special and seeing him having to spend his birthday that way made me feel gloomy and hopeless. As I took the phone to speak to him, not knowing what I could say that would keep his spirits high and hide my sadness as well, I simply asked him what how he was going to spend the day. His response was both unexpected and heartwarming.
He told me that since the day before was Easter Sunday (21st April) there was special chicken prepared in the jail of which some was left over (non veg is served in prison only on certain days) He said he would be sharing this with his barrack mates as a birthday lunch which he was looking forward to and it was quite fortunate that his birthday came immediately after Easter! Seeing this genuine excitement in him instantly brought a smile to my face and I could feel the tears going away.
Here was another example of my father’s indomitable spirit and his ability to cheer up the people around him even in unlikely situations. In spite of the miserable circumstances, he would still smile that infectious smile and holds his head up high. He truly sets an example that everyone can learn from ❤
My mother and I managed to speak to him yesterday (it was a 5 minute 29 second call for the both of us) and thankfully he is well and sounded his usual cheerful self.
With the exploding number of cases in Maharashtra and the overcrowding in Taloja Jail, he and the other BK Arrestees are still very much at risk. There has already been an outbreak at Byculla Women’s Jail with 40 inmates testing positive, one of them being Jyoti Jagtap a Bhima Koregaon arrestee.
It has been almost 3 years since these arrests were made and the trial is still to begin and it seems unlikely that it will start any time soon. Considering the overcrowding in the jails and the findings of the Arsenal Report which show that the evidence in this case is planted and fake, I genuinely hope the courts take note and provide temporary bail at the very least. And more importantly hope that neither he nor any of the other arrestees have to spend their birthdays in such a grim predicament where their lives are at risk and that they receive the justice that has been due to them for far too long.
Hope and optimism do take us a long way but justice is ultimately what is required ✊
The picture is from his 60th Birthday celebration in 2017. What a lovely day that was.