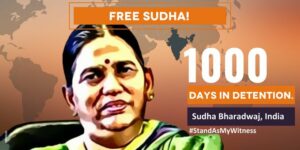 Today marks exactly 1000 days since human rights lawyer & activist Sudha Bharadwaj was arrested & detained on fabricated charges.
Sudha Bharadwaj, aged 59, is a human rights lawyer and activist who has spent her life defending Indigenous people in India and protecting workers’ rights. She has been in pre-trial detention since August 2018, when she was arrested under the draconian Unlawful Activities Prevention Act (UAPA) on trumped up accusations of having links with Maoist terrorist organisations, based on evidence believed to be fabricated.
Read more