Video: What Stan Swamy said before arrest by NIA 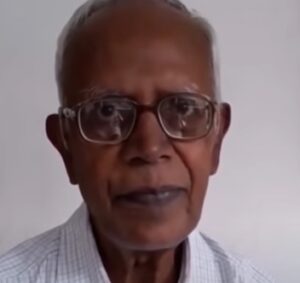 Fr. Stan is dead! Salutes to an extraordinary rights fighter!

PUCL is extremely saddened and anguished by the death of Fr. Stan Swamy today, 5th July, 2021 in the Holy Family Hospital, Bandra, where he was undertaking treatment pursuant to an interim order of the Bombay High Court in his bail petition in the Bhima Koregaon case. What is most tragic is that even as the High Court Division Bench had started hearing the bail petition, news trickled in that he had passed away.
Read full statement

Fr. Stan Swamy was a defender of human rights giving hope to thousands of Dalits and Adivasis

The Leaflet / by Joseph Xavier SJ and Harshita

Human rights activist Fr. Stan Swamy passed away in hospital waiting endlessly for medical bail. He was in jail since last year in the Bhima Koregaon case. Dr. Joseph Xavier SJ and Harshita write about the colourful journey of Fr. Stan Swamy in empowering thousands of Dalits and Adivasis and raising their concerns about justice and displacement.
Read more

Citizens for Justice and Peace (CJP) / by Teesta Setalvad

Poor health conditions in Taloja prison amidst a raging Covid-19 pandemic, lies fabricated by the authorities, valiant efforts by the Jesuit-Human Rights Community and advocates like Mihir Desai and Krithika, form the vicious cycle witnessed closely by some of us in the tragic case of our beloved Father Stan Swamy (and other fellow inmates) over past months.
Read full statement

Jharkhand Janadhikar Mahasabha: Mahasabha pays its tribute to Stan Swamy, who passed away today. His principles have been a source of inspiration for us and will continue to remain so. Stan lives on in our struggles and memories. His life and work in the thread.

NAPM India (July 5):
NAPM joins every justice loving person across the globe mourning the departure of human rights defender #StanSwamy and vows to continue the struggle for holding the criminal State accountable for this institutional murder. Enough is Enough.
#FreeBK16 #FreeAllPoliticalPrisoners

Eamon Gilmore, EU Special Representative for HR (July 4):
I share the concern expressed by the UN Special Rapporteur, Mary Lawlor, about the health and continuing detention of Fr Stan Swamy, whose case the EU has been raising with the Indian authorities +++

SJES Rome (July 5): We are deeply saddened to learn about Fr. Stan Swamy passing away. His life was meaningful and his legacy of this commitment for the rights of the indigenous people will remain. RIP +++

Rights activist Shabnam Hashmi called Stan Swamy’s death “custodial murder” and said that the government has to be held accountable.
The death of the 84-year-old activist Stan Swamy on Monday amid his fight for bail on the grounds of health issues sparked off intense responses on social media from political leaders, activists, journalists, intellectuals among others.
Read more

Killing Him Softly With His Song: A Requiem for Father Stan Swamy

The Wire / by Madan B. Lokur

The entire episode leaves behind a feeling that Stan Swamy was virtually thrust a sentence of death without charges being framed against him and without a trial.
Certain events occurred on January 1, 2018 in Bhima-Koregaon which led to the lodging of an FIR under various sections of the Indian Penal Code, including sedition. After investigation, offences under the Unlawful Activities (Prevention) Act were added. A charge sheet was first filed against some accused persons on November 15, 2018 and a second or supplementary charge sheet was filed against some more accused persons on February 21, 2019.
In the meanwhile, the Maharashtra Police investigating the case searched the residence and office of Stan Swamy in Ranchi on August 28, 2018.
Read more