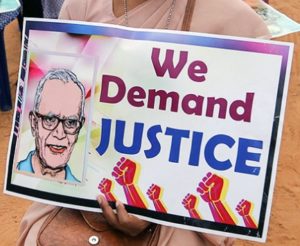 Judicial inquiry into Stan Swamy’s death yet to be initiated: State in Bombay HC

Oral comments made on Swamy, withdrawn by the court after ASG submitted they were ‘twisted’ on social media and by the press.
The Maharashtra government informed the Bombay High Court on Friday that a judicial magisterial inquiry into the death of Father Stan Swamy is yet to be initiated.
Read more

The Bombay High Court on Friday withdrew its oral statements in praise of late tribal rights activist -Father Stan Swamy and his work – after the National Investigation Agency raised objections during his bail hearing posthumously.
Justice SS Shinde, however, said that even judges are human beings and the news of Father Swamy’s death on July 5 was sudden. Moreover, the court had added a rider that it wasn’t making any comment on Father Swamy’s incarceration or arrest under the Unlawful Activities (Prevention) Act.
Read more