Independent forensic experts have raised concerns of evidence being planted in the ongoing Bhima-Koregaon prosecution (ongoing for 45 months, with not even charges framed yet). But India’s tightly regulated criminal process severely restricts the right of accused persons to introduce new material. It speaks to many important concerns for the state, such as speedy trial, but a general rule that brooks no exception does more harm than good.
It has been almost 45 months since the police began investigating the theory of a larger conspiracy in the cases emanating out of the Bhima-Koregaon violence of January 2018.
Read more

It has been five years and the case has witnessed arrests of several activists (some getting bail after long incarceration) for alleged conspiracy and covert involvement in the Elgar Parishad gathering purportedly leading to the January 1, 2018 violence during the bicentenary celebrations of the Battle of Bhima Koregaon.
Last week, during a hearing in the Bhima-Koregaon case, the Supreme Court was struck with an application by the special National Investigation Agency (NIA) court for an extension of one more year to frame charges in the Bhima Koregaon case.
Read more

Also read:
● As Bhima Koregaon case completes its fourth anniversary, State reprisal is writ large in its twists and turns (The Leaflet / June 2022) 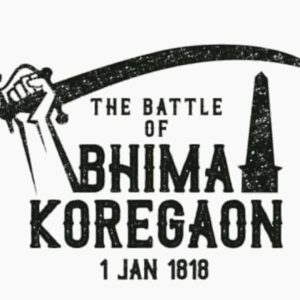 5 years on, charges not framed despite repeat extensions

The Special NIA Court has said that it will first need to dispose the discharge applications filed by the accused, before deciding on framing of charges
The Special NIA court, Mumbai has sought a time extension of one more year from the Supreme Court to frame charges in the case. This request was sent in November last year. On January 16, the Supreme Court said that it will proceed with hearing bail applications of activists Vernon Gonsalves and Arun Ferreira from January 30.
Last year in August while hearing Gonsalves’ plea, the apex court had given the Special Court three months’ time to decide whether charges are required to be framed against the accused or not. This three month period ended in November 2022, just when the Special Court sought an extension for another year!
Read more

On August 18, the Supreme Court had directed the trial court to decide on these aspects within three months, granting it time till last November.
The special court hearing the Elgaar Parishad case in Mumbai had last November sought an extension of one year to decide whether to frame charges against the accused and also take a call on their discharge applications.
Read more

The Indian Express / by Chanda Haygunnde

The two-member inquiry commission has examined 48 witnesses so far, seven of them partly. More yet to be deposed.
Formed on February 9, 2018, the Commission was tasked with inquiring into the “exact sequence” of events that led to violence on the occasion of the 200th anniversary Battle of Koregaon Bhima.
Almost five years after it was constituted and after receiving 10 extensions, the Koregaon Bhima Commission of Inquiry has yet to complete its work.
Read more

Koregaon Bhima inquiry commission gets yet another extension, till March 31

The two-member commission was constituted by the Maharashtra government on February 9, 2018, to inquire into the “exact sequence” of events that led to violence on the 200th anniversary of Battle of Koregaon Bhima on January 1 that year.
The Maharashtra government Tuesday granted yet another extension to the Koregaon Bhima Commission of Inquiry. An order in this regard issued by the state home department on Tuesday stated that the commission has been given an extension of three months till March 31, 2023, to submit the report.
Read more 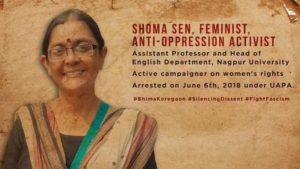 Sen claims she has been falsely arrested because she had exposed illegal arrests and torture.
The Bombay High Court has directed Elgar Parishad accused Professor Shoma Sen to approach the special NIA court for bail before coming to the high court on appeal.
Sen, behind bars since 2018, had applied for bail before the Pune Sessions Court in December 2018 prior to the filing of the chargesheet and another application after the filing of the chargesheet. Both the applications were rejected by the sessions court by way of common order in November 2019.
Read more

Although the court had directed that Mr. Gadling be referred to JJ Hospital, and he was due to recieve psychiatric treatment follow-up on February 20, 2022, he was not taken to hospital until June 6, he alleged
A sessions court at Gadchiroli has issued a notice to the Superintendent and Chief Medical Officer (CMO) of Taloja Central Jail, with regards to their failure to take advocate Surendra Gadling to hospital last year, even three months after being directed to do so by the court. Mr. Gadling is an accused in the Bhima Koregaon caste violence case of 2018.
Read more

The Wire / lyrics by Ramesh Gaichor

“We are in 2023 now and still, charges have not yet been filed,” Senior Advocate Rebecca John told the Supreme Court on Monday, while appearing for activist and Bhima Koregaon accused Vernon Gonsalves, who has been lodged in jail since August 2018 for charges under the Unlawful Activities (Prevention) Act, 1967. A division bench of Justices Aniruddha Bose and Sudhanshu Dhulia was hearing the bail applications of Gonsalves and a co-accused, Arun Ferreira… Indicating that they would like to hear the arguments at length, the bench decided to post the matter on a ‘non-miscellaneous’ day in the week starting on January 30.
Read more

The matter is posted for hearing on January 30.
On Monday, a division bench of the Supreme Court comprising Justices Aniruddha Bose and Sudhanshu Dhulia decided to proceed with the hearing of bail pleas of civil liberties activists Vernon Gonsalves and Arun Ferreira after Justice Dipankar Datta recused himself from hearing the matter on January 12. Gonsalves and Ferreira have filed the bail application in the Supreme Court challenging the rejection of their default bail applications by the Bombay High court.
Read more

The matter will now be taken up next week by a bench that does not comprise Justice Datta.
Thursday, Justice Dipankar Datta recused himself from hearing the bail pleas of civil liberties activists Vernon Gonsalves and Arun Ferreira. The matter will now be taken up by a bench that Justice Dutta is not a part of.
… A Supreme Court division bench, comprising Justices Ravindra Bhatt and Datta, was hearing petitions filed by Gonsalves and Ferreira, challenging the rejection of their bail applications by the Bombay High Court.
Read more

How proper file, malware, and memory forensics techniques were able to catch the ModifiedElephant threat actor planting incriminating evidence on defendants’ computers in India.
I agreed in late 2022 to independently review a new digital forensics report from Arsenal Consulting (hereafter: Arsenal), which was still under embargo. Niha Masih, an award-winning reporter with The Washington Post, reached out to me in early December and explained that she had written a series of articles (based on Arsenal reports) about Indian activists in the “Bhima Koregaon” case who were hacked and had evidence planted on their devices before their arrests. Niha asked if I would be able to validate Arsenal’s work.
Read more


Poster by Campaign Against State Repression

Life partners of jailed human rights defenders Khalid Saifi, Hany Babu and GN Saibaba who gathered in national capital Delhi on Thursday under the banner of Campaign Against State Repression, demanded the immediate release of all political prisoners incarcerated under the Bhima Koregaon and CAA-NRC cases.
This event titled “conspiracy of conspiracy cases” was held to discuss the recent developments in Bhima Koregaon and CAA-NRC case where top intelligence officers have disclosed that there was no connection between the Elgaar Parishad event and Bhima Koregano violence, as well as multiple international forensic reports revealing that the evidence was planted on the BK accused.
Read more

Countercurrents / by Our Representative

Civil rights activists have alleged, quoting top intelligence officers as also multiple international forensic reports, that recent developments with regard to the Bhima Koregaon and the Citizenship Amendment Act-National Register of Citizens (CAA-NRC) cases suggest, there was “no connection between the Elgaar Parishad event and the Bhima Koregaon violence.”
Activists of the Campaign Against State Repression (CASR) told a media event at the HKS Surjeet Bhawan, New Delhi, that, despite this, several political prisoners continue to be behind bars on being accused under the anti-terror the draconian Unlawful Activities (Prevention) Act.
Read more