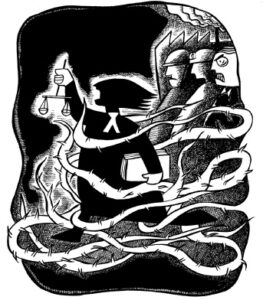 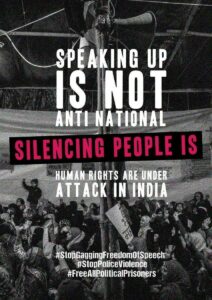 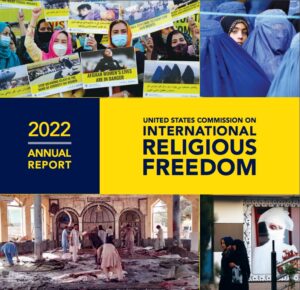 This is the third consecutive year when United States Commission on International Religious Freedom (USCIRF) has designated India as such.
… The latest report, in a section devoted to India, has accused the Narendra Modi government of muzzling dissenting voices, misusing UAPA and sedition laws, allowing illegal arrests of rights’ activists, carrying out violent attacks against Muslims and Christians and creating “hurdles” for NGOs to receive funds from abroad for charity work.
It has also prominently discussed the arrest and custodial death of Father Stan Swamy.
Read more

Other countries recommended for this designation by the USCIRF in its annual report are Pakistan, China, Iran, North Korea, Russia, Saudi Arabia, among others.
… “The UAPA and sedition law have been invoked to create an increasing climate of intimidation and fear in an effort to silence anyone speaking out against the government,” it said.
The report specifically mentioned the treatment meted out to 84-year-old Stan Swamy, a Jesuit priest who was arrested in the Bhima Koregaon case.
Read more
Read full report 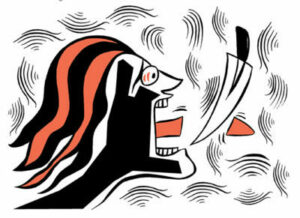 US Department of State / by Bureau of Democracy, Human Rights, and Labor

… Significant human rights issues included credible reports of: unlawful and arbitrary killings, including extrajudicial killings by the government or its agents; torture and cases of cruel, inhuman, or degrading treatment or punishment by police and prison officials; harsh and life-threatening prison conditions; arbitrary arrest and detention by government authorities; political prisoners or detainees; arbitrary or unlawful interference with privacy; restrictions on free expression and media, including violence, threats of violence, or unjustified arrests or prosecutions against journalists …
Read more

The report also flagged extrajudicial killings and arbitrary arrests and detentions by government authorities.
… The report specifically mentioned the treatment meted out to 84-year-old Stan Swamy, a Jesuit priest who was arrested in the Bhima Koregaon case. The case pertains to caste violence in a village near Pune in 2018. Sixteen people were arrested for allegedly plotting the violence.
Read more 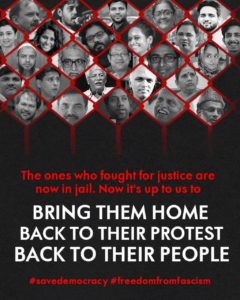 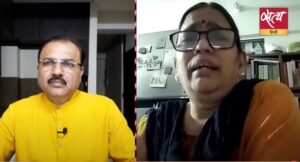 Was the corporate world the reason for the arrest of Sudha Bharadwaj, a social worker who fought for the underprivileged? Was there a conspiracy to implicate him in the Bhima Koregaon case? How was her experience during his three years in prison? How does she view the current times for socio-economic movements? Does she expect times to change? Dr. Mukesh Kumar talking to Sudha Bhardwaj.
Watch video 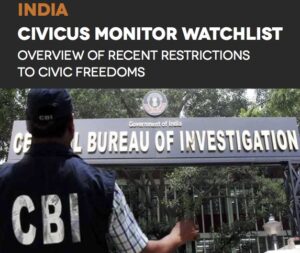 India is currently rated Repressed by the CIVICUS Monitor. There are a total of 49 countries in the world with this rating (see all). This rating is typically given to countries where civic space is heavily contested by power holders, who impose a combination of legal and practical constraints on the full enjoyment of fundamental rights (see full description of ratings). 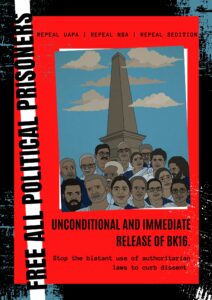 By using security laws, deploying surveillance technology, and leveraging potent national interest narratives, Narendra Modi’s Hindu-first government has targeted critics and eroded the rule of law in India—often in violation of the Constitution, using legal loopholes and grey areas. Through the lens of the notorious Bhima Koregaon case, we investigate these tactics in-depth, and report how citizens are fighting to preserve the world’s largest democracy.
Read more

Making Christmas Good Governance Day, harassing the Missionaries of Charity and Stan Swamy’s death in custody all go against the idea of decency.
The spate of attacks on churches in some states of India, even during the Christmas season of 2021, is not as disturbing to me as five other actions taken by the current political dispensation…The first is the incarceration and subsequent death of Stan Swamy, while still under custody as an undertrial under the Unlawful Activities (Prevention) Act.
Read more