Bail Under UAPA: Court in Review

Section 43D(5) of the Unlawful Activities (Prevention) Act, 1967 lays down stringent provisions for the grant of bail.
In the aftermath of the Bombay terror attacks, the Union government enacted the UAPA Amendment Act, 2008. The Amendment introduced Section 43D (5), which required a Court to deny bail if there were reasonable grounds to believe that the case against the accused was prima facie true. The provision made bail difficult to secure, since it required the Court to assess guilt only by looking at the charge sheet prepared by the National Investigation Agency (NIA). The accused cannot provide any evidence outside the chargesheet in their defense.
Read more

Pendyala Pavana is no stranger to the world of social activism and government repression. Ever since she was a child she has seen her father, a revolutionary poet and activist, subjected to repeated criminal charges, accused of everything under the sun, including murder.
Twenty-four times he has been charged; 24 times he has been found not guilty. Still, Ms. Pavana is shocked by the way her father, Varavara Rao, is being treated in his latest ordeal. “It’s quite against natural justice, and his rights are completely denied,” she says.
Read more

Authorities arrested 4,690 people across India under the Unlawful Activities (Prevention) Act (UAPA) between 2018 and 2021, but only 149 detainees have so far been convicted, according to figures provided by the government.
That means only 3.1 per cent of the arrests under the draconian law in the past three years have ended in convictions.
Read more

The Hindu / by Nadeem Inamdar

Azad Samaj Party has announced that its chief and Bhim Army supremo Chandrashekhar Azad will be visiting the ‘Jaystambh’ in Pune on January 1 to mark the anniversary of the battle of Bhima Koregaon.
“This is the 200th year of the erection of Jaystambh. On this occasion, our party chief Chandrashekhar Azad and state president Rahul Pradhan would be visiting the Jaystambh on January 1,” Abhijit Gaikwad, Pune unit president of Azad Samaj Party said.
Read more

No report of the violence was sent by Mumbai’s police commissioner to the government.
Why was the violence then considered serious enough to be included in the Terms of Reference? Was it a balancing act to counter the accusations that were then being made against Hindutva leaders Sambhaji Bhide and Milind Ekbote?
Jyoti Punwani reports from the Bhima Koregaon Commission hearing.
Read more

The head of the country’s statutory human rights body said that speedy justice was key to rule of law.
National Human Rights Commission chief Arun Mishra on Friday said that suspects in cases should not be jailed without trial and that there was no room for fake encounters. Mishra, a former Supreme Court judge, added that justice was the source of a peaceful society…
As recently as on Wednesday, South African non-profit organisation Civicus put India on a list of countries with “repressed” democratic values. The report had flagged the use of draconian anti-terror law Unlawful Activities (Prevention) Act against activists arrested in the Bhima Koregaon case, repression of the farmers’ protest and the imposition of curfews in Jammu and Kashmir.
Read more 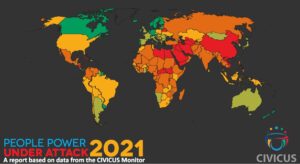 India features on the list of nations with “repressed” democratic values in a report released by South African non-profit organization Civicus ahead of the United States summit on democracy scheduled to start from December 9…
In India, the report noted, the Unlawful Activities (Prevention) Act, or UAPA, was abused by Prime Minister Narendra Modi to keep several people “in pre-trial detention on baseless charges and deny them bail”.
The report mentioned the detentions made under UAPA in the Bhima Koregaon case, including those of activists Sudha Bharadwaj and Stan Swamy.
Read more
Read full report 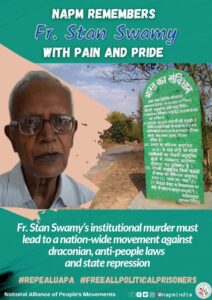 While the fight has faltered, Swamy’s friends and colleagues are taking forward the work he had lived and died for.
“Until his last breath, Stan had hope in the judiciary,” recalled Sheela*, a Delhi-based lawyer who asked to be anonymous for fear of being targeted. “He was waiting for the July 3 hearing where his interim bail plea was to be taken up. I think when that did not happen, he finally lost hope.”
Read more 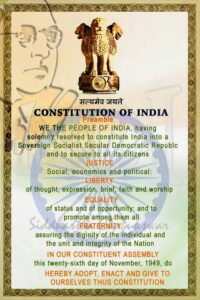 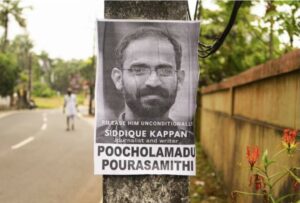 UP police is convinced press releases on Siddique Kappan’s phone are proof of him ‘receiving instructions’ on behalf of PFI
Based on an examination of the chargesheet by defence lawyer Madhuvan Dutt Chaturvedi, Newslaundry has learnt that a series of WhatsApp messages, recovered from Kappan’s phone, have been interpreted by UP police’s special task force as evidence of the organisation Popular Front of India “trying to interfere” in the case of violence at Bhima Koregaon in 2018.
Read more

Press Statement
PUCL calls for the immediate release of Kashmiri human rights defender Khurram Parvez, who was arrested on 22nd November 2021, by the National Investigating Agency under various provisions of the Unlawful Activities Prevention Act and Indian Penal Code…
PUCL firmly believes that the present action is one more attempt on part of the present establishment to silence peaceful, non violent dissenters. In the context of what has happened in recent times concerning cases of Bhima Koregaon, Delhi riots, Tripura violence, farmers protest, the tool kit case, Siddique Kappan case and various others across the country, Khurram’s arrest is one more instance of a brutalizing state machinery being used against human rights defenders.
Read full statement

The probe agency sleuths carried out searches at Khurram Parvez’s residence in Sonwar and office at Amira Kadal.
In an early morning swoop, the National Investigation Agency (NIA) Monday carried out searches at the residence and office of human rights activist Khurram Parvez in Srinagar, in connection with a terror funding probe…
The NIA has reportedly found links between Parvez and charge-sheeted activist Gautam Navlakha, who was arrested by the probe agency last year.
Read more

by Mary Lawlor, UN Special Rapporteur HRDs (Nov 22):
I’m hearing disturbing reports that Khurram Parvez was arrested today in Kashmir & is at risk of being charged by authorities in #India with terrorism-related crimes. He’s not a terrorist, he’s a Human Rights Defender