The BJP’s Toolkit Is Not Working That Well

The Wire / by Amit Shrivastava

Despite the BJP-RSS’s repression tactics having a terrifying and chilling effect on the right to protest, two of India’s largest movements have taken shape since 2019.
By now, it’s fairly obvious that the NDA government has a standard toolkit for dealing with what it regards as troublesome movements. The script goes like this …
The police stand on the sidelines as first propaganda and then violence is unleashed by either the Sangh parivar organisations or others. We’ve now seen this in JNU (in 2016 and again in 2020), in Bhima Koregaon, in the Republic Day incidents, and most terrible of all, in the Delhi killings of February 2020.
Read more

The ‘Buts’ To Freedom Of Speech In India

A trembling, disillusioned father told his daughter to flee her homeland for her safety. This seems like a plot taken straight from a classic wartime story fraught with separation and grief. In reality, such was the conversation my friend had with her father following the unlawful arrests of activists. The Disha Ravi toolkit case was the last straw.
The ‘buts’ to the freedom of speech in India only seem to point to a dictatorial reality, much like that of Airstrip One in George Orwell’s 1984, where even the mere thought of protest is met with prosecution.
Read more

Collective rights cannot remain intact without a collective spirit. The Bombay High Court has shown such compassion lives on in India.
It restores faith in the judiciary and augurs well for Indian democracy that the Bombay High Court has granted bail to revolutionary poet VV Rao on medical grounds. In a sense, the current regime and VV, as he is known among friends, are on opposite ends of the political spectrum.
Read more

(Print edition: March 26, 2021)
The present dispensation uses prosecution as a tool to silence critics and opponents in a way that makes the legal process a punishment in itself.
Julio Ribeiro, a prince among police officers of the highest rank, notable alike for his high integrity and superb efficiency, rendered a great service by bringing home to the Indian reader the allegations of manipulating and planting in the Bhima Koregaon case. He had heard Mark Spencer, head honcho of Arsenal Consulting, a private digital forensics company. Ribeiro had heard Spencer on an Indian national TV channel “certifying that the police in India had been taken for a ride by an extremely clever hacker”. His article in The Indian Express on February 22 is entitled “The truth is out there” under the sub-heading “Allegations of manipulating and planting evidence in Bhima Koregaon case must be investigated.
Read more

The Green Left / by Kavita Krishnan

Madhya Pradesh Chief Minister Shivraj Chouhan has proposed that every woman stepping out of her home be required to register herself with her local police station so that the police can track her for her safety.
Chief Justice Sharad Arvind Bobde asked last month why women had been “kept” at the farmers’ protests and praised Supreme Court advocate AP Singh (a man with a record of victim-blaming and support for honour crimes) for giving an assurance that women would be sent home and kept out of the protests…
It is no coincidence, after all, that some of the inspiring Indian feminist figures of our times (to name a few — advocate Sudha Bharadwaj and teacher Shoma Sen, student activists Natasha Narwal and Devangana Kalita of Pinjra Tod, Ishrat Jahan and Gulfisha) are in prison today under draconian laws, and no judge seems able to see and end the appalling injustice of their incarceration.
Read more 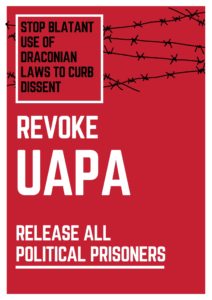 Data revealed by the home ministry earlier showed that just 2.2% of the cases under the Act ended in court convictions.
There has been a 72% increase in the number of arrests made under the draconian Unlawful Activities (Prevention) Act (UAPA) in 2019 in relation to those made in 2015, according to data provided by the Ministry of Home Affairs (MHA) in the Lok Sabha.
According to The Hindu, the MHA revealed that as many as 1,948 persons were arrested under the UAPA in 1,226 cases that were registered across the country in 2019. Between the years 2015 and 2018, 897, 922, 901 and 1,182 cases were registered and 1,128, 999, 1,554 and 1,421 people were arrested, Union minister of state for home G. Kishan Reddy said in a written reply.
Read more

In July 2019, the ambit of UAPA was expanded. It was amended allowing the government to designate an individual as a terrorist without trial.
The Ministry of Home Affairs told the Lok Sabha that there has been over 72 per cent increase in the number of persons arrested under the anti-terror law UAPA.
Read more 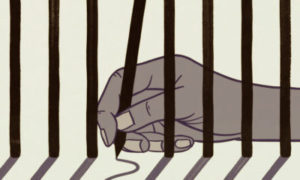 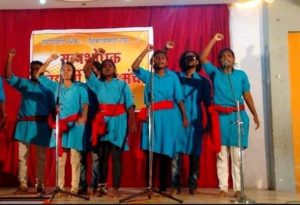 … Shahirs talk about caste discrimination and Brahminism, they talk about Shivaji Maharaj and Mahatma Phule’s thoughts. They also talk about how Babasaheb fought against casteism and spread the awareness in the masses about the messages that Babasaheb wanted to convey to them. Shahiri troupes are important part of contemporary movement of Dalit women…
Sheetal Sathe in her interview to the Marathi news channel talks about her journey in the movement.
When she was in college, she came in contact with activists from Kabir Kala Manch and music for which she have had a liking towards since childhood.
Read more 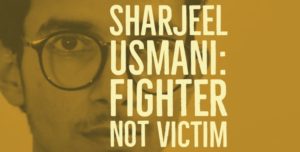 The Wire / by Betwa Sharma

The 23-year-old former student of AMU is facing charges of sedition for his speech. He says he is fighting for his “fair share in Indian society”.
When Sharjeel Usmani was invited to speak at the Elgar Parishad event on January 30 in Pune, the 23-year-old did not think twice before saying yes. He was undeterred by the fact that over a dozen activists and thinkers had been jailed since the event was first held on December 31, 2017, to mark 200 years of the historic battle in which the Mahar regiment of Dalit soldiers defeated the Brahmin Peshwas. He was undeterred by the fact that he had already been charged for attempt to murder, rioting and promoting communal disharmony, following the protests against the Citizenship Amendment Act (CAA) at Aligarh Muslim University (AMU), and spent two months in jail last year.
Read more

The noted lawyer speaks about the need for a legal framework to make the state pay for violating civil liberties by way of wrongful prosecutions.
The recent spate of FIRs invoking sedition charges against journalists for allegedly sharing unverified information on social media about the death of a protestor during the farmers’ tractor rally on January 26 has prompted a former Supreme Court judge to call for an interventionist approach by the apex court to deal with the “rampant abuse of the criminal justice system”.
Read more

Have We Seen the Last of Conspiracies?

There is a need to now explain and create a sensible narrative about how conspiracies become narratives that favour the ruling dispensation.
The idea that “conspiracy theories” can explain politics is often rubbished, but now, after the recent revelations by Washington Post that a plot was allegedly hatched to compromise the laptop of jailed activist Rona Wilson, it has become imperative to see how conspiracies have been systematically used by the current regime.
Read more

What is striking about recent developments in India is the manner in which the media, both legacy and social, have become entangled with the politics of the day. In fact, they have become the site upon which politics plays out.
Whether it is the raid conducted by the Enforcement Directorate on the offices of NewsClick, the ongoing counter-narrative to the farmer protests conducted by the BJP’s troll armies, the spiriting away of journalists by the police, the battles against tweets put out by Greta and Rihanna, the Twitter spats, or the ever-tightening surveillance net cast by the government on media operations, what is at stake, as Shoshana Zuboff reminded us in a different context, is “sovereignty over one’s own life and authorship of one’s own experience.”
Read more

Video: Not Just Bhima Koregaon, the Needle of Doubt is Now on All Matters, says Mihir Desai 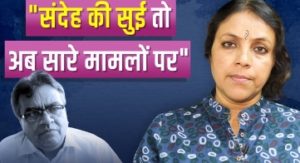 In a special offering by Newsclick, senior journalist Bhasha Singh spoke to Mihir Desai, a senior advocate at the Bombay High Court about the new revelation by The Washington Post in the Bhima Koregaon case which has revealed that offensive material was planted through a software on arrested political activist Rona Wilson’s laptop. The disclosure is important because it almost makes it clear that electronic evidence was planted in the Bhima Koregaon case and there is a strong sense of fear that it may happen in other cases as well.
Watch video

The future of the world’s largest democracy is looking increasingly less democratic. Prime Minister Narendra Modi is the most dominant Indian leader in five decades, while the country’s independent institutions have rarely appeared weaker…
One case in particular has become a litmus test for the rule of law and freedom of expression in India. Three years ago, police in a state controlled by Modi’s party began arresting activists under a stringent anti-terrorism law.
Read more