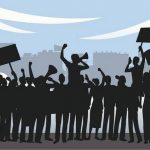 On 28th August, 2018 the Pune Police swooped down on prominent rights activists of the country: Sudha Bharadwaj, Arun Ferreira, Vernon Gonsalves, Gautam Navalakha, and Varavara Rao. They were to be taken to Pune on the fabricated charge of being linked to CPI (Maoist) party and funding Elgar Parishad. At the same time, premises of Stan Swamy and Anand Teltumbde were also raided, and both have been shown as “suspected accused” under various sections of the UAPA. All of the arrested and accused are long-standing contributors to various public discussion fora, including Sanhati, espousing their commitment to the people and democracy.
Read more