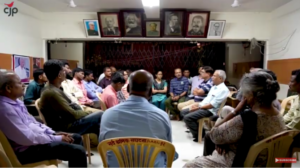 On January 12, 2018, two weeks after Bhima Koregaon Elgar Parishad program in Pune, the Anti-Terrorism Squad (ATS) of the Maharashtra Police picked up four workers of Reliance Infrastructure, one contractor from the same company and a casual worker. Their houses in the slum were raided in the middle of the night for hours before the arrest. A union activist was picked up a day before. The ATS squad questioned several other workers from the same company in the following days and finally arrested one more person from Reliance Infrastructure on 25th January. Interestingly, all the eight arrested men are migrants from Andhra/Telangana region. All of them have been charged under draconian Unlawful Activities (Prevention) Act (UAPA).
Read more