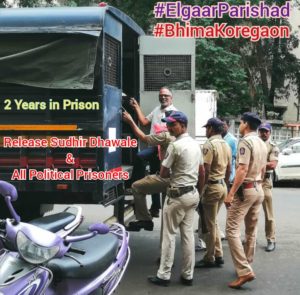 After spending close to four years (2011-2014) in jail in India (where he was denied every kind of human right) on charges of being a ‘Naxalite’, Sudhir Dhawale was acquitted of all charges. Reflecting on his traumatic experience, Sudhir soberly identifies his private struggle as being part of a much larger public and collective struggle for democratic values. Sudhir:

“I have been politically active since my student days. I knew then what I was fighting against and its character. Definitely, it [the government] doesn’t have a pro-people character. As a student, then later as a literary person and as a political activist, we have had only one goal in mind, to build people’s struggle, participate in their struggle and create a truly democratic society. It is this aspiration that drives lakhs of people like me to enter the domain of democratic struggle. You can call this a war if you wish. The military and police of this country have taken up arms against its own people and the people have become compelled and are trying to fight back. This is the reality today. You can call it whatever name you want but this is a war. The form may keep changing. Speaking for the people, participating in the people’s struggle is like fighting in a war. The consequences of this war also need to be understood. Those who understand this have no problems going to jail. I don’t believe that I lost four years of my life. This is also a part of our struggle. I am one among the hundreds and thousands of people who fought for our rights and went to jail and I am also part of the hundreds and thousands who have been hounded by fabricated charges and sent to jail. In both cases, people have been dogged by repressive laws and continue to be crushed. My suffering is not separate from these. This is part of people’s suffering. And thus, there is nothing I can underline as exceptional about it.”

Sudhir, is however, back in jail in June 2018, this time accused of being part of an ‘urban naxal’ plot to overthrow the government. The charge is based on his leadership and participation (along with thousands of others) in a public rally on December 31, 2017 in the village of Bhima Koregaon near Pune in western India. The event was held to commemorate the 200th anniversary of historic military victory of a small British battalion, largely comprising soldiers from the oppressed Mahar (Dalit) caste, over an army of dominant ‘upper caste’ Peshwas. Dhawale was one of the organisers of the Elgar Parishad, the main forum coordinating the event. On the day of the bicentenary celebrations, mobs of people carrying saffron flags attacked the predominantly Dalit gathering at Bhima Koregaon. A week later, the Pune Police registered a first information report in relation to the violence, in which Dhawale was named as an accused. Following this FIR, Dhawale and four others were arrested on June 6, 2018. They have been charged under the draconian Unlawful Activities Prevention Act (UAPA) including on charges of being a member of, providing support to and raising funds for a terrorist group.

Who is Sudhir Dhawale? – A silent organiser
Born to a Dalit family in the slums of Indora, an Ambedkarite hub in Nagpur, Sudhir Dhawale has been working as freelance journalist and full time social worker since 1995. He is a well-known name in any fact-finding exercises conducted by civil society groups post any human- rights violation in Maharashtra. Over the last many decades, Sudhir has been a civil liberties organizer and activist participating in protests against various injustices including the much publicized ‘suicide-institutional murder’ case of the Dalit student Rohit Vemula. Some of the cases of social injustice that Dhawale was involved in actively bringing to public view are: Murder of Rohidas Tupe in Palgaon near Aurangabad, Baban Misal murder in Nagar district, murder of Sadahiv Salve Guruji at Mazhil in Beed district, murder of Rohan Kakade in Satara, rape and murder of Manorama Kamble in Nagpur, murder of Sahebrao Jondhale in Hingoli district, Saujanya Jadhav case in Navi Mumbai, a case of Meera Kamble who was paraded naked at Reay Road, Mumbai, Ahiwale case in Satara district, and the murder of an old Adivasi couple at Mauda in Nagpur district. He had also played prominent role in Khairlanji protests.

On 11 July 1997, when the police gunned down 10 innocent Dalits in Ramabai Nagar (in Ghatkopar, Mumbai) while protesting the desecration of Dr Ambedkar’s statue, Sudhir got actively involved in the Committee formed to get the culprit, a petty police sub inspector Manohar Kadam, punished. In 1999, he played a leading role in organizing a Vidrohi Sahitya Sammelan, opposing the state sponsored Brahmanical literary extravaganza, in Dharavi slum, which was presided over by the late progressive Dalit litterateur Baburao Bagul. The Vidrohi literary conference transformed into a Vidrohi Sanskrutik Movement (Rebel cultural movement), of which Sudhir was the main organizer. As a part of this movement, he launched a Vidrohi Prakashan with small donations and loan and soon began publishing a monthly ‘Vidrohi’, of which he was the editor.

He also started a cultural-political organisation called ‘Ramabai Nagar-Khairlanji Hatyaakand Virodhi Sangarsh Samiti’ in 2006 following the lynching, rape and mutilation of four members of a Dalit family in Khairlanji in the Vidarbha region of Maharashtra. The organisation, however, disintegrated soon after and another organisation, the Republican Panthers Jaatiya Antachi Chalwal (Republican Panthers Caste Annihilation Movement) was born on December 6, 2007, at the Dr. Bhimrao Ambedkar memorial in Chaityabhoomi, Mumbai.

Besides, he has been writing and publishing pamphlets and booklets which helped spread awareness about the plight of dalits and adivasis. Sudhir thus became an integral part of the progressive movement in Maharashtra. He actively worked along with others for reaching relief to victims of caste atrocities and helping them get justice.

Falsely charged and imprisoned, 2011-2014
In his younger days, Dhawale actively participated in the activities of the political party, Communist Party of India (Marxist-Leninist) or CPI(ML). As he reminds us of how the state ‘frames’ cases against politically active citizens:

“I am from Nagpur. I was actively involved in activities of CPI (Marxist-Leninist) People’s War, which was not a banned organization [the CPI-ML splintered into various factions, some of which morphed into the banned CPI (Maoist) in 2004]. Until 1994, I was very active in the movement in Nagpur along with senior leaders like Kobad Gandhy and Anu (Anuradha Gandhy). While people started going underground around 1992-93, many like me moved to Mumbai in search of jobs and livelihood. There was nothing illegal to associate with an organization that was legally constituted. Ever since it was banned, I have not participated in any activities. In fact, at the time of my arrest, I even told the police about my past work. I never hid anything from the police.”

Yet, the police used decades old photographs of Sudhir posing with well-known Maoist leaders, to frame charges of conspiracy and sedition against him. Telling, Sudhir talks in his interviews now about how most of the individuals who were with him in jail, charged with being Maoists, were either Dalit or Adivasi (indigenous, ‘tribal’) youth:

“Dalits have always been an easy target, both for the State and the savarnas. Over hundreds of cases have been slapped against the protestors. Caste atrocity is a part of state oppressions. It is their conspiracy. As our voices became sharper, the State found it difficult to handle… I along with several other activists have been very active on the anti-caste front. It is not just the savarnas [upper-castes] who are responsible for caste atrocities, but the State, too. I, through my writings have tried to expose the state. It caused a lot of restlesness”.

Interestingly, Sudhir continues to support Naxalism through his speech and writings and is rather candid about it: “Talking about naxal movement, I have no qualms in saying I support it. I have several books in support of the naxals. I have openly said so in the past and will continue to say so.” Nonetheless, as many High courts and the Supreme Court in India have ruled on multiple occasions, ‘guilt by association’ is an invalid charge in a court of law in India, and hence being a ‘Maoist sympathizer’, holding Maoist beliefs, having Maoist literature does not constitute a crime. The burden of proof is on the state to show how material support has been provided to banned activities. This has clearly not been the case with Sudhir Dhawale who was finally released after 40 months in jail.

Indeed, the court’s ruling that set Dhawale free in 2014 is a very strongly worded condemnation of the abuse of state power under the UAPA. It is worth reproducing it here.

“From the evidence on record there appears not single piece of evidence that the accused persons had organized any terrorist camp, or having recruited any person for terrorist acts.”

Noting the “conflict” between security and personal liberties, the judge added:

“The curtailment of civil liberties and freedoms guaranteed by the Constitution is held permissible only where the acts in question would involve a tendency to create an imminent danger of disturbance of law, or where the acts would amount to a clear and imminent incitement to violence.”

Since one of the main basis of the prosecution in the current 2018 case against Dhawale is his speech at the Elgar Parishad in which he supposedly called for ending the modern-day Peshwa rule, another part of the same judgment too maybe relevant to reproduce here:

“Therefore to constitute a ‘Terrorist act’ there needs to be an ‘act’, ‘intention’, and use of Specific weapons like bombs, dynamite, other explosive substances, inflammable substances, firearms or other lethal weapon , poisons or noxious gases or other chemicals or any other substances whether biological or otherwise of hazardous nature. In absence of these three ingredients no terrorist act can be attributed against the accused.”