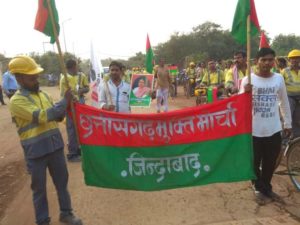 Today thousands of laborers of Chhattisgarh Mukti Morcha-Mazdoor Karyakarta Committee (CMM-MKC) and Pragatisheel Cement Shramik Sangh (PCSS) came out on the streets of Bhilai (Chhattisgarh).
Speakers in the meeting said that nowadays the right of the workers to speak up is being taken away and that this is an attack on the right of freedom of expression. They also said that they stand in solidarity with advocate Sudha Bhardwaj who spoke on the rights of workers and who was arrested under UAPA. They criticised that she has not been released on bail even after one year and that this directly violates democratic values.
Read more (hindi)