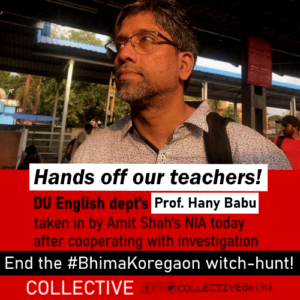 The DU academic’s wife, professor Jenny Rowena, told The Wire that the NIA has tried repeatedly to nudge him towards implicating others in the case, during questioning.
Mumbai: The National Investigation Agency (NIA) on Tuesday, July 28, arrested Delhi University associate professor of English, Hany Babu M.T, in connection with the Elgar Parishad case. With Babu’s arrest, 12 people – all activists, lawyers and academics – have been arrested in the case.
Read more

The Quint / by Amita Nandy

The National Investigation Agency (NIA) has arrested Delhi University Professor Hany Babu on Tuesday, 28 July in connection with the Bhima Koregaon violence probe. He was being interrogated at the NIA’s Mumbai office since 23 July.
Read more

The National Investigation Agency on Tuesday arrested Delhi University professor MT Hany Babu in connection with the Bhima Koregaon case, reported PTI.
Babu will be produced before a special NIA court in Mumbai on Wednesday, according to The Times of India.
Read more