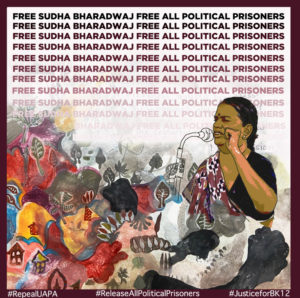 Video: Stand with Sudha Bharadwaj on her 3rd Birthday in Jail 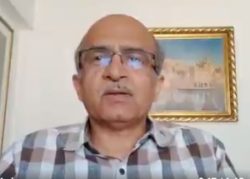 Tomorrow Sudha Bharadwaj is spending her 3rd Birthday in Jail on an absurd charges under UAPA. An alumnus of IIT Kanpur, a Professor of NLS, she gave up her US citizenship to work for tribals in Chhattisgarh. We hope she will soon be out to resume her exemplary work there.
Watch video statement (1:42min) here

Call: Stand with Sudha Bharadwaj on her 3rd Birthday in Jail

You might be already aware of the infamous Bhima-Koregaon conspiracy case. One of the (now sixteen) activists arrested in the case is Sudha Bharadwaj, a lawyer and trade unionist from Chhattisgarh. On Sunday, 1st November, she will be spending her third birthday in jail, as we, Sudha’s Friends and Family support group, watch in distress.
We stand in solidarity with her.
We were hoping that you could join us in sending her a birthday message – perhaps a short one-minute video on a social media account (Twitter/Facebook/Instagram), perhaps also in other ways you deem fit.
#HappyBirthdaySudha
#FreeBhimaKoregaon16
#FreeSudhaBharadwaj
Just in case you need it, here is a brief bio on her below.
Best regards
On behalf of Sudha’s Friends and Family support group

Sudha was born in 1961 in the USA to economist parents (her mother founded Centre for Economics Studies and Planning at Jawaharlal Nehru University, her father is also an economist and an academic). She completed integrated MSc (Math) at IIT Kanpur in 1979, and was socially active in various groups on the campus. But – in her own words – her “coming of age” was in 1984 – the year of the Bhopal gas tragedy and the antiSikh riots. After finishing the program at IITK in 1984, she taught at DPS for a couple of years in Delhi where she got exposed to the migrant workers’ struggles during the 1982 Asiad Games.
But by 1986 she decided to relocate to Chhattisgarh, attracted by the inspiring collective of mine workers in Dalli-Rajhara – Chhattisgarh Mukti Morcha – which had attracted youth like her from wide across. It was then led by Shaheed Shankar Guha Niyogi who was assassinated a few years after she had joined. Over the years, Sudha took a leading role in the union, and spent decades in the industrial belt of Bilaspur-Durg-Bhilai. She also earned her lawyers credentials along the way, developing a parallel and consequential legal practice.
At the time of her arrest on 28.08.2018, she was teaching at the National Law University in Delhi, was a recognised authority on Labour Law and Constitution Law, and was the National Secretary of the PUCL.

Sudha Bharadwaj to spend birthday behind bars, third year in a row!

While no birthday in jail can ever be ‘happy’, here’s how you honour the human rights defender on her special day.
Trade Unionist and lawyer Sudha Bharadwaj was among the five activists and human rights defenders rounded up by a vindictive regime in August 2018, as a part of a crackdown on dissenting voices. She was picked up in a second wave of arrests due to her alleged “maoist links” that somehow, according to the police, meant that she was a part of the Bhima Koregaon conspiracy!
It is noteworthy that Bharadwaj was neither an organiser of nor present in Pune during the Elgaar Parishad! If it sounds preposterous, it is because it is indeed utterly ludicrous!
On November 1, Bharadwaj will be spending her birthday behind bars for the third straight year. Here’s what you can do to make it ‘happy-ish’.
Read more

On the occasion of, lawyer, activist and trade unionist, Sudha Bharadwaj’s birthday, watch this sabrangindia video where journalist and activist Teesta Setalvad talks about her work, the undemocratic nature of her arrest and the conditions of women activists in general, nationwide and globally.
Watch video (3:54min) here

Dear Friends,
Greetings from Taloja prison, Mumbai. I hope you are all keeping fine.
I want to share with you that I am keeping good health, despite some ailments.
A few fellow prisoners are very helpful to me. Considering my age and inability to adopt to prison conditions, I am given an assistant to help me to move around. I have been given a private cell with commode facility and simple special diet.
I have access to some journals and magazines.
I spend my time in reading, praying and interacting with fellow prisoners.
I have asked for some warm clothes as it is cold here. I hope the prison authorities will permit me to have them to protect me.
I am languishing in prison for some alleged offences, which I have not committed.
If this is God’s will, so be it.
I hope truth will win and I will be released soon on bail.
I received your greetings and prayers through one of my Jesuit colleagues, whom I called over phone on 25 October, Sunday morning.
I am allowed to make phone calls once in 15 days.
Continue to remember me and all my friends here in the prison.
Fr. Stan Swamy

Stand With Stan – A Musical Video

The Print / by Apoorva Mandhani

Since 2018, stringent UAPA rules, SC’s Zahoor Watali order, NIA takeover and allegedly ‘inadmissible’ evidence has made sure that all accused remain in custody.
On 31 December 2017, a group of activists, political leaders and even retired judges came together at Shaniwar Wada in Pune.
Called the Elgar Parishad (Congress for Speaking Aloud), the organisers of this event included former Supreme Court judge, Justice P.B. Sawant, and former Bombay High Court judge, Justice B.G. Kolse-Patil. The event saw songs, street plays and speeches on various issues, including Dalit rights and criticism of the Narendra Modi government.
Read more 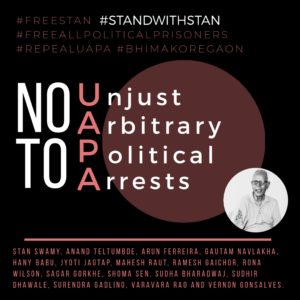 The Guardian / by Tony Afejuku

Very recently, I received the sad news of what is happening to a wonderful Jesuit priest who to boot is an activist, a solid defender of human rights in India that has since ceased to be the incredibly incredible India of my then years.
Its politicians especially of now have turned or better stated, are turning that mysteriously ancient country of civilisations into a Soviet/Russian Gulag where agents of the state carry out acts of terror against dissenters who they accuse of terrorism and its negative wonders of blemish.
Read more 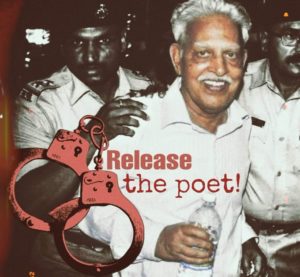 The Supreme Court on Thursday directed the Bombay High Court to list the bail application of 81-year-old poet P. Varavara Rao, who is an undetrail in the Bhima Koregaon case, before the appropriate Bench and hear it at the earliest.
A Bench comprising of Justices UU Lalit, Vineet Saran and S. Ravindra Bhat expressed concern about the bail application filed on medical grounds not having been listed before the Bombay High Court since 17 September and directed the Chief Justice of Bombay High Court to list the same at the earliest.
Read more

The Supreme Court Thursday asked the Bombay High Court to expedite the hearing of the bail application filed by noted poet Dr. Varavara Rao on medical grounds.
It also expressed concern at the delay in hearing Rao’s bail application which was last heard by the High Court on September 17 when one of the judges in a two-judge bench recused himself from the case. The Court also directed the High Court to examine whether Dr. Rao would be required to be treated in a speciality hospital.
Read more

SC Declines to Order Transfer of Varavara Rao to Hospital

The bench headed by Justice UU Lalit requested the Bombay HC to take up the matter urgently.
The Supreme Court on Thursday, 29 October, declined to grant bail on medical/humanitarian grounds to 80-year-old Varavara Rao, one of the accused in the Bhima Koregaon case.
Read more

The Hindu / by Krishnadas Rajagopal

Apex court requests HC Chief Justice to list case for hearing at the earliest.
The Supreme Court on Thursday did not order the immediate release from jail of ailing poet-activist Varavara Rao even as it voiced concern over a month-long delay witnessed in the Bombay High Court to hear urgent pleas for his liberty and medical treatment.
Read more

Statement by Release the Poet

This November 3rd Varavara Rao will turn 80. And coming November 17th it will be two years of him being taken to custody by the Pune Police for his alleged connection with Maoists in the fabricated Bhima Koregaon Case.

By now, we all are aware of his health conditions. Last July he was diagnosed with Covid-19 and was admitted to Nanavati Hospital in Mumbai. END_OF_DOCUMENT_TOKEN_TO_BE_REPLACED

Representatives of Christian and rights organisations hint at urgent need for the convergence against the current ‘fascist’ forces.
Christian organisations and human right groups have called for Dalits, tribal and minorities to join hands with other concerned citizens and protest attempts by the central government to silence voices of dissent by misusing the anti-terror law UAPA.
Read more

Bhima Koregaon Case: A Critical Appraisal: Our Call – Free them All

Background to Bhima Koregaon Event
The 1818 Battle of Koregaon is of importance for Dalits. On 1st January, 1818, 800 troops of the British Army, with large number of Mahars, Dalit Community of Maharashtra predominant among them, defeated a numerically superior force of the Peshwa Baji Rao II …
On 1st January, 2018, like every year, lakhs of Dalits poured into Bhima Koregaon. The commemoration has a record of being conducted peacefully and the village’s residents have a history of social harmony. But this year, tensions had begun to build in a neighbouring village over the question of which community had conducted the last rites of Maratha ruler Sambhaji – the Mahars or the Marathas.
Read more

Countercurrents / by Indian Christians for Democracy

A webinar was organised with major initiative of Indian Christians for Democracy on 25th October, Sunday, 2020 from 11.00 to 1.00 pm …
The objectives of the webinar were 1) Keep pressure on for the release of all falsely accused and arrested; 2) False accusation, detention and arrest becomes a debating point and the government gives up this practice; 3) Nation-wide demand for the repeal of UAPA.
Read more 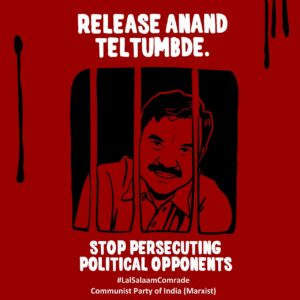 In his books, the writer – now in jail – demonstrates how caste atrocities are the result of deep-rooted societal structures.
In grappling with the horrors of Hathras, the absence of Anand Teltumbde’s voice resounds. In the writings of Teltumbde, who is currently incarcerated in Taloja prison in the Bhima Koregaon case, the horrific singularity of caste atrocities are distilled as a precipitate of a long-enduring history and deep-rooted societal structures. Few public intellectuals in independent India have shown as much insight and courage in chronicling the cunning and cruelty of state and society.
Read more