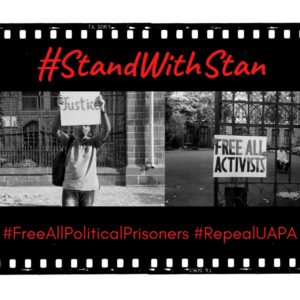 Father Stan Swamy has to go to court for a straw

The court, whose permission is required for materials to be sent in from outside jail premises, set the next hearing for November 26.
When Father Stan Swamy, the 83-year-old tribal rights activist, was arrested in haste in Ranchi in the Bhima Koregaon case and taken to Mumbai last month, he had carried a bag with him.
In the bag was a sipper with a straw, which he needs to consume liquids. Father Stan suffers from several age-related ailments apart from Parkinson’s, which has left him unable to hold any open liquid container like a cup or a mug without spilling the contents.
Read more

Father Stan Swamy, the 83-year-old tribal rights activist arrested last month over his alleged involvement in the Bhima-Koregaon case, has moved the special court in Mumbai for permission to use a straw and sipper cup while drinking.
The NIA (National Investigation Agency), which arrested Mr Swamy – who has been diagnosed with Parkinson’s Disease – from his residence in Ranchi on October 8, has sought 20 days time to respond.
Read more

Stan Swamy files plea to allow use of straw, sipper in Taloja jail

83-year-old accused in Bhima-Koregaon case, suffers from Parkinson’s.
Father Stan Swamy, 83, on Friday filed an application before the special court seeking that he be allowed the use of a straw and sipper in Taloja Central Jail where he has been lodged as he cannot hold a glass due to Parkinson’s disease.
The prosecution has sought time 20 days to file a reply to this application and the matter will be heard on November 26.
Read more