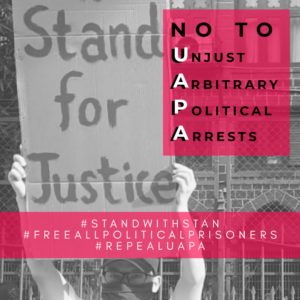 The Telegraph / by Umanand Jaiswal

A candlelight vigil in the city on Sunday seeking the release of Father Stan Swamy and the 15 other rights activists arrested in the 2018 Bhima Koregaon case had to be called off after the police denied permission.
Northeast Solidarity (NES) had on Thursday sought permission to hold the vigil at Dighali Pukhuri from 4.30pm to 5.30pm on Sunday, demanding the release of the 16 accused “falsely implicated under the UAPA” in the Bhima Koregaon case.
Read more