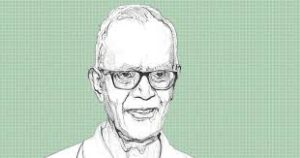 The Leaflet / by Thomas Menamparampil

Eighty-four year old Father Stan Swamy who had spent decades serving the tribal people of Jharkhand, was arrested on trumped up charges, subjected to endless interrogations, and confined to Taloja jail for over eight months. As he battles illness, his endurance has left a message for the world says Archbishop Thomas Menamparampil who was nominated for the Nobel Peace Prize in 2011.
Read more