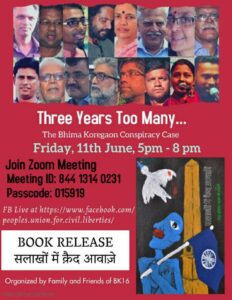 Recalling his bruising experiences with an unjust criminal justice system as part of the legal team of the activists arrested in the questionable Bhima Koregaon violence case three years ago, Nihalsing B Rathod, in this second of a three-part series, recollects how basic tenets of criminal law were violated by the Pune Police in arresting Sudha Bharadwaj, Varavara Rao, Arun Fereira, and Vernon Gonsalves at various points, and extending their detention, as well as that of Surendra Gadling, Shoma Sen, Rona Wilson, Sudhir Dhawale and Mahesh Raut. All this while, Gautam Navlakha and Anand Teltumbde exhausted all legal options to evade arrest, as the judiciary looked on, condoning the deprivation of the activists’ liberty and denying their bail applications, sometimes making gestures that filled the activists’ legal team with hope but ultimately continuing the farce that is the Bhima-Koregaon travesty.
Read more