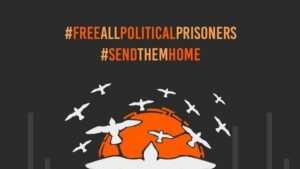 The Opposition’s demands include an SC-monitored probe into the Pegasus issue and a high-level probe into the Rafale fighter jets deal, a repeal of three farm laws and early polls in J&K.
The leaders of 19 Opposition parties announced on Friday that they will organise joint protests and demonstrations across the country from September 20 to 30, even as they urged people to save India for a better tomorrow.
Read more

…
10. Release all political prisoners, including those under draconian UAPA in Bhima Koregaon case and anti-CAA protests.