Release Sudha Bharadwaj and other comrades 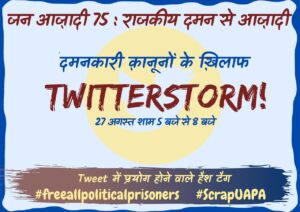 National Day of Protest Against Draconian Laws on 28th August, 2021

Friends,
As you already know, NAPM is part of the ongoing joint national campaign against UAPA, sedition and all other draconian laws, which are threatening our right to democratic dissent.

The key demands of this campaign are:
1) Justice for Stan Swamy.
2) Repeal of UAPA, sedition and all other draconian Central and State laws.
3) Restore the Right to Bail.
4) Release all Political Prisoners.
5) Accountability for filing false cases and compensation to victims.
6) Stop illegal detentions and weaponizing the criminal justice system.
Read more