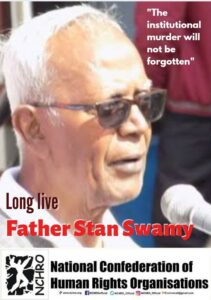 The Statesman / by Sankha Ghosh

“Fr Stan had given his entire life to ensure the rights of the marginalized people, and he had been never silent for the rights of the poor people. But he had been arrested under false charges and he died in an inhuman, insensitive manner. We will carry forward his movement for social justice,”
Rights activists, civil society groups, mass organisations, tribal organisations and members of trade unions today vowed to continue their struggle to demand the abrogation of the stringent Unlawful Activities (Prevention) Act (UAPA), sedition law, and unconditional release of political prisoners.
Read more

Father Stan Swamy’s struggle to be taken to panchayats

One of the conveners of Shahid Father Stan Swamy Nyay Morcha said the awareness campaign will start on September 1 and continue till October 8
Members of trade unions, non-BJP parties and civil society organisations who have come together in the aftermath of the custody death of Father Stan Swamy have decided to take the Jesuit priest’s struggle for the rights of the oppressed and undertrials to the panchayat level in Jharkhand.
Read more

The state unit of CPM concluded its two-day state convention on Saturday where it decided that it will organise campaigns at the grass-root level to highlight issues such as civil liberties, the release of political prisoners and scrapping of the Unlawful Activities (Prevention) Act.
Read more