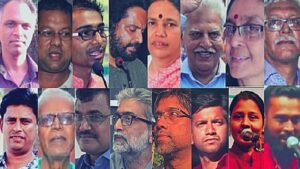 Relatives of the Elgar Parishad case accused lodged in jail have demanded that the special facility of allowing phone calls by prisoners started during the Covid pandemic should not be discontinued. The facility has been demanded for all the prisoners, irrespective of the cases under which they have been held.
Read more

Since prisons are all set to resume physical mulaqats, the authorities have informed the families that weekly calls will no longer be functional.
The family members of the accused undertrials in the Bhima Koregaon violence case, have written to the Additional Director General of Police (Prisons) and Special Inspector General of Police (Prisons) to continue the weekly phone calls with them.
Read more