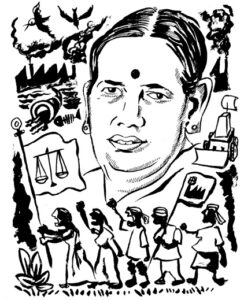 Currently incarcerated under trumped up charges in the world’s so called largest democracy, Sudha Bharadwaj is one of the dozens of scholars and activists locked up in the Indian jails.
Bharadwaj, who turned 60 on November 1, is a lawyer who has been advocating for the rights of the poor and marginalized, especially Adivasis or the Indigenous peoples of India who are being evicted from their traditional mineral-rich lands by the extraction industry with the backing of the government.
Read more

Also read:
● As Sudha Bharadwaj Spends 4th Birthday in Jail, a Reminder That UAPA Enables Her Incarceration (The Wire / Nov 1, 2021)