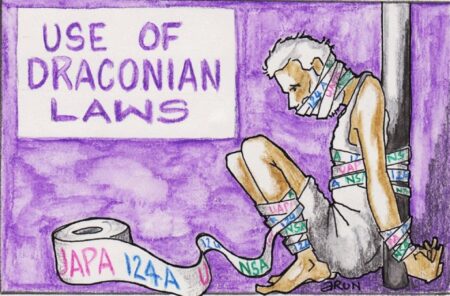 The unlawful activities are defined in such a vague manner to make its application solely on the discretion of police machinery, say the petitioners.
The petition has been filed by two advocates and one journalist, who have been booked under UAPA in connection with their social media posts and work related to the recent communal violence in Tripura …
Many eminent lawyers and activists also petitioned against sections of UAPA
Bhima Koregaon accused Anand Teltumbde has filed a petition before the Bombay High Court challenging Section 43D of UAPA on bail as well as misuse of the term “front organisation” by the National Investigation Agency (NIA).
Read more

As the police reach increasingly for draconian UAPA, are the courts pushing back?

There have been a few instances recently of the courts granting bail to people accused under the anti-terror law.
… Over the past few years, there has been an increase in the number of cases against the government’s critics under the UAPA, a harsh law that was passed to deal with terrorist activities and actions such as inciting secession or disrupting the sovereignty and territorial integrity of India.
Read more

… It has been a sorry state of affairs for fundamental rights in the courts when the word national security is uttered by the government like in the Rafael, Bhima- Koregaon and Rohingya Refugee matters. The court’s dilettante disposition for fundamentals rights is quite conspicuously reflected by its own line of decisions. This being a persistent notoriety of the courts in India, it is time- warranted that the Supreme Court needs to find the correct opportunity to rectify the judicial alacrity to uphold provisions of law highly repugnant to fundamental rights when place against national security concerns and craft a balancing approach whereby fundamentals rights and the security of the state both can peacefully co-exist.
Read more