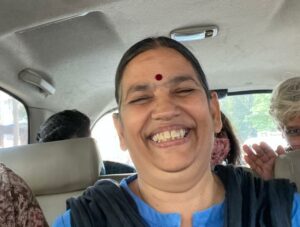 Pic: Sudha Bharadwaj, after being released

In Chhattisgarh, spontaneous celebrations as workers wait for “Sudha didi”

As news spread about the Supreme Court rejecting the NIA’s plea against the bail granted to activist Sudha Bharadwaj on Tuesday, a large group of workers, draped in yellow and gray uniforms, began celebrating at Burah Pandal opposite the ACC Limited cement factory in the industrial town of Bhilai. It was not the only spontaneous gathering of workers in Chhattisgarh to acknowledge the relief granted to their beloved Sudha “didi”.
Read more

Lawyer-Activist Sudha Bharadwaj Released After Over 3 Years In Jail

Activist Sudha Bharadwaj walks out of jail after over three years

The NIA court has asked her to not make any statements to the media.
Lawyer-activist Sudha Bharadwaj, an accused in the Bhima Koregaon case, was released from Mumbai’s Byculla women’s jail on Thursday, NDTV reported. Bharadwaj was arrested in August 2018, and was granted default bail by the Bombay High Court last week.
Read more

By Prashant Bhushan:
+++ Welcome back Sudha Bharadwaj, the indefatigable crusader for human rights for the downtrodden, after spending over 3 years in jail on trumped up charges. One day,your tormentors will be held to account. Hope others similarly jailed in the Bhima Koregaon case are also released soon +++

By Jignesh Mevani:
+++ Where bail not jail is the rule, Sudha Bharadwaj had to spend three years in jail for her speech that has been alleged to cause voilence. We urge the courts for early release of all those you have been made political scapegoats of the highest order under draconian laws like UAPA +++

By NAPM:
+++ NAPM salutes the determination of trade unionist & people’s lawyer #SudhaBharadwaj, as she walks free from jail after 3 yrs of arbitrary incarceration, amidst harsh bail conditions. It is high time all activists jailed in ‘Bhima Koregaon’ case are immediately released.#RepealUAPA +++

TwoCircles.net / by IAMC and HfHR

Indian American Muslim Council (IAMC), an advocacy group committed to safeguarding India’s pluralist and tolerant ethos, and Hindus for Human Rights (HfHR), an advocate for pluralism, civil and human rights in South Asia and North America, rooted in the values of the Hindu faith, have welcomed the release of renowned Indian human rights defender and lawyer Sudha Bharadwaj on December 9 after being incarcerated for more than three years without trial.
Read more