The event took place exactly four years after violence had broken out in the area, leading to the death of a youth.
An event to mark the 204th anniversary of the Battle of Bhima Koregaon at the Jaystambh in Perne village in Pune district remained peaceful on Saturday. But as a large number of visitors turned up at the ‘military monument’, social distancing was not maintained and the Covid-prevention norms laid down by the government went for a toss.
Read more

Thousands, by some estimates over half a million, of people from across the country converged on New Year’s Day to observe and celebrate the victory of Dalit Mahar troops under the British over the Bahmin Peshwa’s army at Bhma Koregaon over two centuries ago.
Read more

by Collective Delhi (Jan 1):
Keep alive the flame against Neo-Peshwa Raj of RSS BJP, free the #BhimaKoregaon political prisoners. Let the history of Bhima Koregaon inspire us to demand #RepealUAPA and #FreeAllPoliticalPrisoners so that more such heroic victories can be won by our people’s struggles. 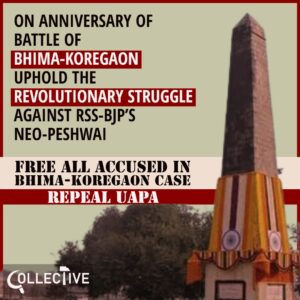 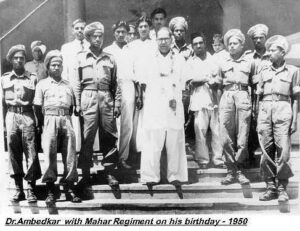 The violent clashes that erupted in the village of Bhima Koregaon and surrounding areas on New Year’s Day in 2018 seared Maharashtra’s social fabric, while heightening social tensions across the State.
The clashes resulted in massive destruction of property belonging to Ambedkarite members and its reverberations were felt throughout the country.
Read more

The two-member commission was constituted on February 19, 2018, by the Devendra Fadnavis government. However, due to Covid-19, lack of manpower, and on an occasion, government apathy has led to delay for the commission to submit the report.
Read more

Also read:
● Bhima Koregaon: The Mystery of Fadnavis’ Terms of Reference (Rediff.com / Dec 2021)
● Let’s Remember the Lesson of Bhima Koregaon: Down with the New Peshwai (Sanhati│by Sudhir Dhawale│March 2018)
● The Myth of Bhima Koregaon Reinforces the Identities It Seeks to Transcend (The Wire | by Anand Teltumbde | Jan 2018)