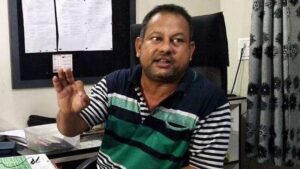 Following this, Special Judge Dinesh E Kothalikar directed the jail superintendent to preserve the CCTV footage and provide clone copies of the Digital Video Recorder (DVR) to Gadling.
Lawyer Surendra Gadling, arrested in the Elgaar Parishad case, on Wednesday told the court that he was not being referred to for a medical examination by the jail authorities despite a court order. Gadling also sought that CCTV footage of the Taloja Central Prison, where he is lodged, be preserved.
Read more

hindi | 11min | 2021
In August, when human rights lawyer Surendra Gadling was released on interim bail for a week, he made a quick visit to the Nagpur sessions court to meet his colleagues and friends. 51- year-old Gadling, a well-known criminal lawyer in Nagpur, was once a cultural activist, who sang songs of political resistance. The 11- minutes- long rendition tells you what it means to be incarcerated in Indian prisons. From food, water, to medical care, everything is a struggle, Gadling narrates.
Watch video