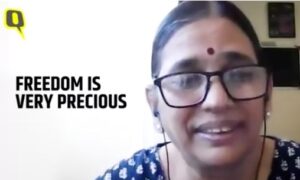 The Quint / by Nishtha Gautam

Exclusive interview with lawyer and activist Sudha Bharadwaj, an accused in the Bhima Koregaon case.
Sudha Bharadwaj, lawyer and activist, was granted bail in December 2021 after spending three years in Mumbai’s Byculla prison. One of the 16 accused people in what is being talked about as the Bhima Koregaon case, Bharadwaj is still awaiting a trial.
In this exclusive interview, she talks about freedom, justice, patriotism, constitution and a lot more.
Watch video