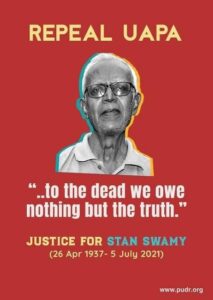 Prime Minister Modi unveiled a statue of Alluri in Andhra Pradesh one day before the first death anniversary of the Jesuit priest, who passed away in custody.
On a recent domestic flight, the head of the cabin crew made an announcement from the airlines informing passengers that July 4 was the birth anniversary of
Alluri Seethrama Raju.
“He led the ‘Rampa Rebellion’, the protest of tribal people against the British Raj,” the announcement said.
Read more

A year ago, on 5 July 2021, when Father Stan Swamy left us, the world mourned the death of a great human being who epitomised compassion, courage, collaboration and commitment! ‘Stan’, as he was lovingly called by those close to him, died whilst he was still incarcerated. From the time he was illegally arrested on 8 October 2020, he languished in the Taloja jail; his deteriorating health conditions prompted the Special Court to direct the jail authorities to admit him to a private hospital in Bombay where he finally succumbed, despite the best possible medical treatment given to him at that time! It was indeed too little too late. For one, Stan should never have been arrested;
Read more

Father Frazer Mascarenhas, the former principal of St Xavier’s College in Mumbai and the Parish Priest of St Peter’s Church, in whose care Swamy was in his last days, in conversation with Sadaf Modak.
On July 5, it will be a year since the death of 84-year-old priest and Jharkhand-based activist Stan Swamy while in judicial custody. Swamy was arrested in the Elgaar Parishad case by the National Investigation Agency (NIA) in October 2020 and a chargesheet filed against him for his alleged links with banned CPI (Maoist). Swamy had denied the charges.
Read more 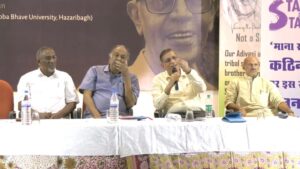 Essential to have defenders of rights in country

The Telegraph / by Animesh Biosee

Times of India / by Jaideep Deogharia

Ranchi: Vice-chancellor of National Academy of Legal Studies and Research (NALSAR), Hyderabad, Faizan Mustafa while addressing the first Stan Swamy memorial lecture here at XISS auditorium on Friday said that the activist believed in true spirit of human rights. “Swamy came from a different state to fight for the oppressed and people of a different state,” he said.
Read more