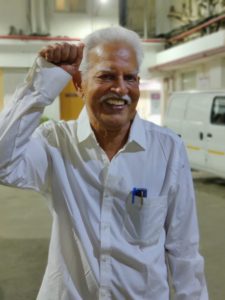 The Supreme Court on Monday adjourned to July 19 the hearing of the petition filed by octogenarian P Varavara Rao seeking bail in the Bhima Koregaon case.
A bench comprising Justices UU Lalit, S Ravindra Bhat and Sudhanshu Dhulia granted the adjournment at a request made by Solicitor General of India, Tushar Mehta.
The SG requested for adjournment and agreed that the interim protection given by the Bombay High Court to Rao from surrender, which is expiring today, can be extended.
Read more

Earlier today, a vacation bench of the Supreme Court directed its registry to list on July 11 the appeal filed by poet, activist and teacher P. Varavara Rao, accused of inciting violence in the Bhima Koregaon case, against the Bombay High Court’s order refusing to extend his medical bail.
Senior advocate Anand Grover mentioned the appeal before a vacation bench comprising Justices Surya Kant and J.B. Pardiwala, seeking an urgent listing of the appeal, given that the due time for Rao to surrender is expiring on July 13.
Read more