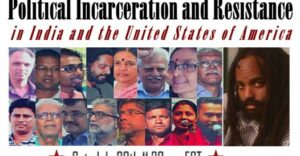 “Free them all!” A call of solidarity with political prisoners in India, America, and beyond

SASW / by Padma B and Beena Sarwar

… Whereas ‘fascism’ isn’t a phrase to be taken evenly, it’s tough to keep away from given how political dissent is being crushed in numerous nations. This got here by in shows at a current seminar within the Boston space about political repression and incarceration in India and the USA.
Read more

Video: Political Incarceration and Resistance in India and the United States 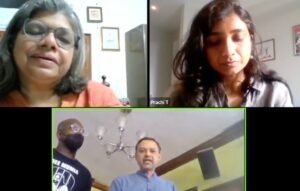 1. Resisting the Political Incarceration in India. Speakers: Kavita Srivastava is the national secretary of the People’s Union of Civil Liberties (PUCL). She is a dedicated human rights worker, working collectively towards restoring democracy, justice and ending inequalities. Prachi Teltumbde is a doctor and researcher based in London. She is also the daughter of Anand Teltumbde, a prominent public intellectual and one of the BK 15.
2. Mumia Abu Jamal’s Monumental Struggle Against Corruption and Empire. Speaker: JD

The demand to release incarcerated political activists in South Asia and the United States is gaining momentum. The incarceration of Bhima Koregaon 15 (BK 15), the institutional murder of Father Stan Swamy, and recent arrest of Teesta Setalwad and Mohammad Zubair has been condemned worldwide. In the US, the struggle continues to release the famous political prisoner Mumia Abu Jamal, well known for his powerful struggle against the Philadelphia political machine and analysis of current events. Boston South Asian Coalition’s (BSAC) and Jericho Boston are holding a joint event on July 30th (Saturday) 11:30am EST to discuss the state of political prisoners in India and the US.
Watch video