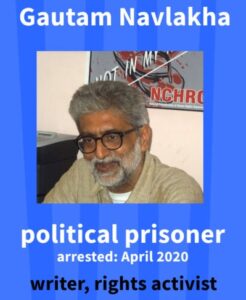 Seeking court’s permission to use a mosquito net !

Most people will remember that two years ago, an elderly man had to approach the court to seek access to a straw to drink water in prison because he suffered from tremors. Fr Stan Swamy was in jail for leading legal battles for the rights of tribal communities. His punishment included the denial of the basic right to drinking water comfortably… Prominent human rights activist and journalist Gautam Navlakha is a trial prisoner in the same Elgar Parishad case in which Stan Swamy was accused and arrested. Two days ago, Navlakha approached a special NIA court for permission to use mosquito nets in the jail.
Read more

He filed the application in court days after another accused person, Vernon Gonsalves, contracted dengue in jail.
In his plea, Navlakha told the court that the area in which the Taloja jail in Navi Mumbai is located is prone to dengue and malaria. “The applicant [Navlakha] is very troubled due to the influx of mosquitoes at the prison and is unable to sleep at night even after using mosquito repellents,” the plea added.
Read more

Navlakha’s application filed through lawyers Wahab Khan and Chandni Chawla said that despite these directions passed by the court, Gonsalves contracted dengue and has been unwell since August 31. Gonsalves is currently admitted at state-run J J Hospital.
Days after his co-accused in the Elgaar Parishad case, Vernon Gonsalves, contracted dengue in Taloja Central Jail, activist Gautam Navlakha again approached court seeking a mosquito net. Over the past few months, undertrials at the prison and jail authorities have faced-off over lack of mosquito nets in the prison. In May, jail authorities seized mosquito nets of undertrials stating that the strings and nails used to tie the nets can be a security risk…
Meanwhile, the special court will hear Gonsalves’ application for temporary bail on medical grounds on Friday. The court on Tuesday received a report from JJ Hospital where he is admitted.
Read more

Also read:
● NIA court rejects plea to use mosquito nets in prison (The Leaflet / July 2022)
● Hunger Strike unto death against the harassment from Taloja Central Jail’s apathetic administration (By Sagar Gorkhe / May 20, 2022)