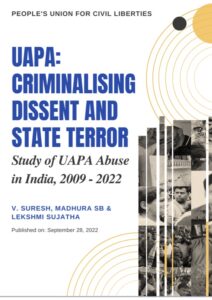 Study of UAPA Abuse in India, 2009 – 2022
Published: Sep 28, 2022
41 pages
PUCL’s study on the use and abuse of UAPA covering the period between 2009 and 2022, with special emphasis on the NIA. A first in the series of a larger collaborative work as part of #RepealUAPA campaign.
Download report

The Hindu / by The Hindu Bureau

Report by the People’s Union for Civil Liberties says ‘suo motu power’ by Centre to transfer investigation from the State police was a ‘serious threat to federalism’
The People’s Union for Civil Liberties (PUCL) has released a report titled ‘UAPA: Criminalising Dissent and State Terror’ on the alleged abuse of the legislation during 2009-22, and demanding the law be repealed.
Read more

The News Minute / by Jahnavi Reddy

The PUCL study found that 8,371 persons were arrested under the Unlawful Activities Prevention Act between 2015 and 2020, while only 235 were convicted under the draconian anti-terror law in the same period.
A total of 8,371 persons were arrested in 5,924 cases under the draconian Unlawful Activities Prevention Act (UAPA) across India between 2015 and 2020, according to a report by the People’s Union for Civil Liberties (PUCL), which sheds light on the Union government’s alleged abuse of the anti-terror law and calls to repeal it. In the same period, however, only 235 persons were convicted under the UAPA.
Read more