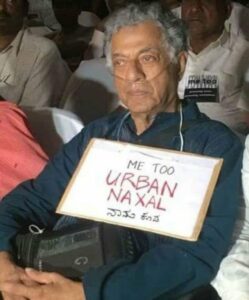 The rise of ‘Urban Naxals’, a term ‘not used by Govt’

The Indian Express / by Vidhatri Rao

BJP has used it for AAP, Modi has attacked Cong over the same, and now it figures in PM’s Gujarat speeches.
Speaking after laying the foundation stone of the country’s first bulk drug park in Gujarat’s Bharuch district Monday, Prime Minister Narendra Modi brought up the issue of “Urban Naxals”…
The BJP has been using the term regularly since it first became popular after high-profile arrests of activists in July and August of 2018 in the Elgar Parishad case. Probing alleged links of the arrested activists to the violence at Bhima Koregaon in Pune that followed the Elgar Parishad event, police called them Urban Naxals.
Read more

How the term Urban Naxal came to being

The term ‘Urban Naxal’ is based off a Maoist strategy
PM Narendra Modi on Monday cautioned the people of Gujarat against ‘Urban Naxals’ trying to enter the state in a veiled attack on the Aam Aadmi Party, blaming ‘Urban Naxals’ of obstructing development projects in his home state. The term was coined by filmmaker Vivek Agnihotri’s May 2017 essay in right-wing magazine Swarajya, who went on to direct films like The Tashkent Files and The Kashmir Files. It came to be used in political circles in the wake of the Elgar-Parishad case, where left-wing dissenters who were critical of the Modi government were arrested in connection with violence in Maharashtra’s Bhima-Koregaon in 2018.
Read more