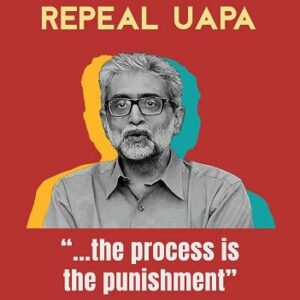 Explainer: As activist Gautam Navlakha is allowed house arrest, what does this actually involve?

When allowing him to leave Taloja jail for house detention, the Supreme Court on Thursday listed stringent conditions he would have to follow.
On Thursday, the Supreme Court allowed human rights activist Gautam Navlakha, who has been in Taloja jail since April 2020 in the Bhima Koregaon case, to be placed under house arrest for a month. The activist, who is 70 years old, said that he was suffering from various health ailments and had asked to be shifted out of jail.
While ordering house arrests, courts have the power to impose conditions as they deem fit, so that the trial is not hampered. In a 2021 case, the Supreme Court ruled that house arrests can also be used as a form of detention.
Read more

Getting a house in and around the city has been a challenge – both due to financial reasons as well as the fact that they were arrested by the National Investigation Agency (NIA) and charged under sections of the UAPA for alleged Naxalite links
The Supreme Court on Thursday allowed Elgar Parishad – Bhima Koregaon violence case accused Gautam Navlakha for a month’s house arrest on account of his old age and ill health.
Read more