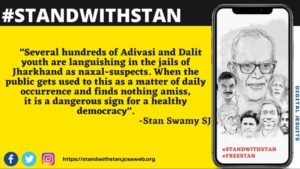 A warrior for Jharkhand’s adivasis, Father Stan Swamy, arrested for his alleged role in the Bhima Koregaon violence case, is remembered by peers as someone who worked to uplift the marginalised despite his struggle with Parkinson’s disease.
For Father Stanislaus Lourduswamy, true religion is standing for justice, humanity and truth. His ideas made many within the Church uncomfortable. To them, he was a radical of sorts. But, this was his life’s mission, and many activists, including myself, were inspired by his journey,” says Tony PM, a freelance researcher and social activist in Ranchi, who has been associated with the 83-year-old Jesuit priest since 1993.
Read more

#StandWithStan: It’s about Constitution, democracy and freedom of expression

It is more than three weeks now: On the night of October 8, 2020, the 83-year-old Jesuit Fr Stan Swamy was taken into custody by the National Intelligence Agency (NIA) from his residence in Ranchi to an undisclosed destination. According to his colleagues, the NIA did not serve a warrant on Fr. Stan and that their behaviour was absolutely arrogant and rude…
We must stand with Fr Stan Swamy now for several significant reasons.
Read more