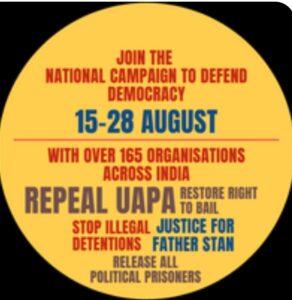 The Wire / by Gaurav Vivek Bhatnagar

As many as 1,226 Unlawful Activities (Prevention) Act (UAPA) cases were filed by the central investigation agencies and state police in 2019, a 33% increase from 2016, the Union government told the parliament. However, when it was asked to share details of how the law has been used, the government avoided answering in ‘larger public interest’.
… In July 2018, ahead of the 2019 Lok Sabha polls, a protest was held by lawyers and civil rights activists against the UAPA. Gautam Navlakha of People’s Union for Democratic Rights (PUDR), who also participated in the protest, had suggested that a movement against UAPA was needed and efforts should be made to seek the commitment of political parties ahead of the general election so that it is repealed.
At the same event, civil rights activist and lawyer Sudha Bharadwaj gave a detailed account of how the UAPA was being misused against Dalits, tribals and minorities.
Read more