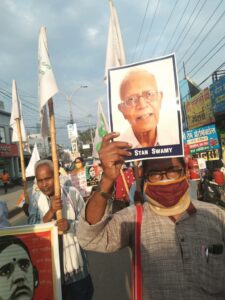 A collection of artists came together on Independence Day in a virtual performance to honour Father Stan Swamy, the 84-year-old Jesuit priest and tribal rights activist who passed away in a Mumbai hospital on July 5 after being jailed in the Elgar Parishad case.
‘Kelvi Koothu’ or Dirge for Democracy, a two-hour event, had a line-up which included gaana artist G Isaivani of the Casteless Collective who was included in the BBC’s top 100 women list of 2020 and others like Gana Muthu, Muniammal, Kachha (Dholak), Citizens’ Choir, Kattiyakaari, Kalaimamani Muthuchandran’s Tholpaavai troupe, Rithvik Raja and Praveen Sparsh.
Read more 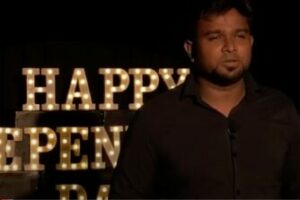 The price of liberty is eternal vigilance. Happy Independence Day is a greeting, a celebration, an opportunity to renew our commitment to safeguarding the Constitution of India and a reminder that democracy survives only if citizens actively thwart moves to curtail freedom. #Kelvi Koothu or Dirge for Democracy is that satirical, artistic reminder that a passive citizenry will herald the death of democracy. #FatherStan #IndependenceDay #August15 Catch the fantastic artist line up of Gana Muthu, Muniammal, G. Isaivani, Kachha (Dholak), Citizens’ Choir, Kattiyakaari, Muthuchandran’s Tholpaavai troupe, Rithvik Raja and Praveen Sparsh at #KelviKoothu.
Watch video