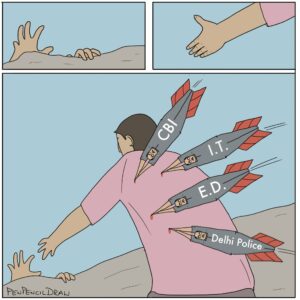 The human rights group expressed concern about a number of cases, including raids on the premises of actor Sonu Sood and activist Harsh Mander.
… In January, the Human Rights Watch had released its “World Report 2021”, in which it took note of the security clampdown in Jammu and Kashmir, violence in Delhi in February, cases against activists in the Bhima Koregaon violence and crackdown on foreign funds of non-governmental organisations.
Read more

Can Modi government solve India’s many problems by raiding activists and journalists?

From Harsh Mander to Rana Ayyub to Newslaundry, recent moves have only reinforced the impression that the state wants to intimidate anyone asking questions.
In the middle of 2020, as the first wave of the Covid-19 pandemic was raging all around India, a Group of Ministers from Prime Minister Narendra Modi’s administration met six times to figure out how to “neutralise the people who are writing against the government”.
Read more