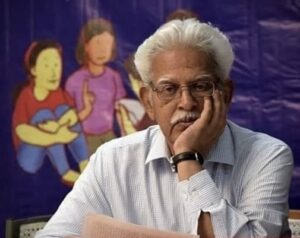 Pic by Release The Poet

Rao, arrested in the Elgaar Parishad case in 2018, was granted medical bail by the HC on February 22 for six months. The court had said he would have to either surrender or seek another extension based on his health condition after six months.
The Bombay High Court on Friday extended by two weeks the time to surrender for Elgaar Parishad accused Varavara Rao, the octogenarian who has sought extension of his medical bail and permission to shift to his residence at Hyderabad citing ill health and high expenses in Mumbai.
Read more

The Bombay High Court on Friday extended interim protection to Telugu Poet PV Varavara Rao from surrendering before prison officials in the Bhima Koregaon – Elgar Parishad Case after his petition could not be heard due to paucity of time.
Rao has sought an extension of the medical bail granted to him on February 22, 2021, for six months, and modification of a bail condition to reside at his home in Telangana.
On Friday, after Rao’s counsel informed the court that the octogenarian is protected only until tomorrow, Justices SS Shinde and NJ Jamadar said that interim protection granted earlier would continue till the matter is heard after two weeks.
Read more

The Hindu / by pti

Varavara Rao (82) was granted interim bail for six months on medical grounds by the HC on February 22 this year, and was scheduled to surrender and return to judicial custody on September 5.
The Bombay High Court on Friday adjourned till October 13 the hearing on a bail extension plea filed by poet-activist Varavara Rao, an accused in the Elgar Parishad case, and said he need not surrender before Taloja jail authorities till October 14.
Read more