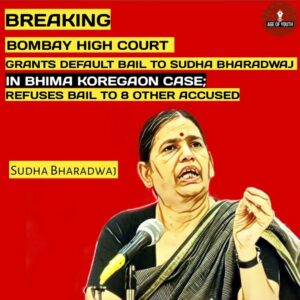 Audio: Understanding the Judgement of the Bombay High Court

Date: Dec 1, 2021
Speakers: Mihir Desai and others
In order to understand the judgement in the Bhima Koregaon, default statutory bail case granting bail to Sudha Bharadwaj (National Secretary of the PUCL), but rejecting the bail of 8 others who had also similarly applied, namely Dr. Varavara Rao, Dr. Shoma Sen, Surendra Gadling, Vernon Gonsalves, Sudhir Dhawale, Rona Wilson, Arun Ferreira, Mahesh Raut,
we are holding a meeting on December 1st, 2021 from 8pm to 10pm.
All are welcome to listen to the lawyers share their views on the judgement.
V. Suresh (General Secretary PUCL )
Kavita Srivastava (National Secretary)

Sudha Bharadwaj’s application for default bail was pending on the date the application for extension of time to file chargesheet was made.
While granting default bail to lawyer and activist Sudha Bharadwaj on Wednesday, the Bombay High Court refused bail to eight other co-accused in the Bhima Koregaon case.
The Bench of Justices SS Shinde and NJ Jamadar made certain interesting observations in the 120-page order while deciding the pleas filed by Bharadwaj and 8 others challenging orders of the Pune Sessions Judges.
Read more/read judgement

In its detailed order granting default bail to Sudha Bharadwaj the Bombay High Court said that Additional Sessions Judge of Pune KD Vadane was not authorized to extend the time for Pune Police to file the charge sheet under provision of the UAPA Act on November 26, 2018 and therefore she was entitled for default bail.
Read more/read judgement

Bombay HC grants default bail to Sudha Bharadwaj, but declines the same to eight other accused

The Leaflet / by Sabah Gurmaj and Paras Nath Singh

The Bombay High Court grants default bail to Sudha Bharadwaj in the Bhima Koregaon case on the ground that the court which took cognizance of the chargesheet against her was not competent, while it denied the same to the other accused in the case, because they did not claim their right to default bail in time. Paras Nath Singh and Sabah Gurmaj write about the High Court’s application of the principles of default bail in these cases.
Read more