NewsClick / by Relatives and Representatives of the BK16; NewsClick

The relatives and representatives of the accused persons in the Bhima Koregaon case have released a statement drawing attention to the deteriorating health of several undertrials – including Vernon Gonsalves – and the brazen negligence of the prison authorities...

Statement:
In yet another act of criminal negligence, the prison authorities of Taloja Central Jail, Maharashtra, have delayed medical treatment for Vernon Gonsalves, a prominent activist and one of the accused in the Bhima Koregaon – Elgar Parishad case.
Gonsalves, who is 65 years old, fell ill with fever on August 30th, and even though his condition was steadily deteriorating, he was treated with just paracetamol and antibiotics in jail, for almost a week. After much pleading, he was taken to JJ hospital on September 7 and was given oxygen support. However, instead of continuing his treatment, he was callously brought back to jail where his condition continued to worsen. It is only after his lawyer and wife, Susan Abraham, approached the court and obtained an order, that the prison authorities finally admitted him to the emergency ward of JJ hospital, where he is still under treatment.
Read full statement 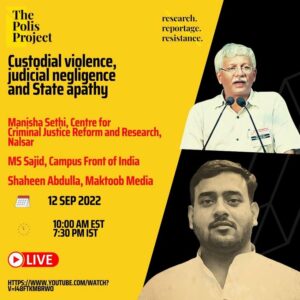