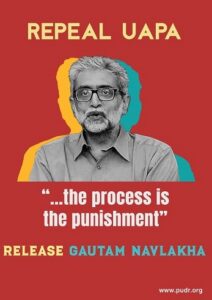 The Supreme Court of India on Tuesday sought the responses of the National Investigation Agency and State of Maharashtra in a petition moved by Gautam Navalkha seeking to be placed in house arrest instead of Taloja jail in connection with the Bhima Koregaon case.
A bench comprising Justices KM Joseph and Hrishikesh Roy, while considering the matter, asked the counsel appearing for the petitioner to brief them on the present plea.
… The matter will be next taken up on September 29
Read more

The Wire / by Teesta Setalvad

The activist-writer, herself incarcerated for 63 days this June-September, makes a strong plea for the recognition of political prisoners and the option of house arrest – if at all, they deserve incarceration.
The prison, it is famously said, holds a mirror to society. The conditions within prisons, to stretch this analogy further, reflect the quality of any democracy. By that yardstick, India needs a hard and harsh soul-search. Not only has our collapsing criminal justice system ensured a mockery of reasonably speedy trials but tardy and often skewed (if not biased) investigations and prosecutions have ensured that undertrials languish unforgotten in our jails, for decades.
Read more