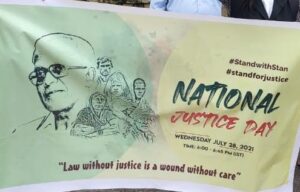 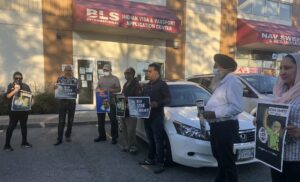 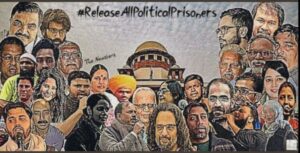 The morcha has held discussions with the Aituc, Intuc, SFI and social organisations for an all-India coordination committee
Trade unions, farmer unions, student unions and social organisations protesting against the death of Father Stan Swamy in judicial custody will form a coordination committee to submit memoranda to governors of different states for the repeal of the Unlawful Activities (Prevention) Act and release of rights activists arrested under the anti-terror law on allegedly flimsy grounds.
Read more

In memory of Fr Stan, Varanasi demands release of Bhima-Koregaon accused and other political prisoners
The Samiksha Sanskrit Manch, a Varanasi-based citizens’ group has demanded the release of those arrested under draconian laws.The demand was made during a tribute meeting and candle march organised on July 12, 2021 in memory of Adivasi rights activist and Jesuit priest Fr. Stan Swamy.
Read more

By Citizens for Justice and Peace

In wake of Fr. Stan’s passing, CJP appeals for release of remaining Bhima Koregaon accused.
Citizens for Justice and Peace (CJP) has once again written to Maharashtra Chief Minister Uddhav Thackeray, urging him to consider recommending to the high-power committee, that the remaining accused in the Bhima Koregaon case be released on interim bail. There are still 14 people languishing in jail after Fr. Stan Swamy passed away and Varavara Rao was released on medical grounds.
Read more

Murder by the system: Cops, activists launch into verbal clashes at protest site

Claiming that Swamy’s death was “murder by the system”, and that he was treated inhumanly after his arrest, activists gathered under the banner of ‘Bhima Koregaon Shauryadin Prerna Abhiyaan’ and staged a protest.
Heated arguments broke out between police and activists gathered at the Pune district collectorate during a protest on Monday against the death of Father Stan Swamy, an accused in the Elgaar Parishad case.
Read more 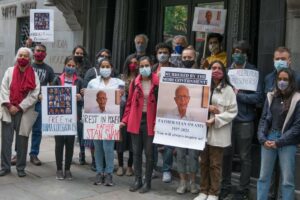 South Asia Solidarity in London, outside the High Comm of India. 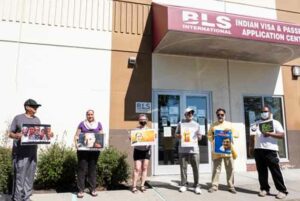 Teltumbde is DR. BR Ambedkar’s grandson-in-law and people came together outside Indian Visa and Passport Application Center.
Close to the first anniversary of the arrest of a renowned Indian scholar, members of Indians Abroad for Pluralist India (IAPI) held a demonstration in Surrey on Sunday, April 18.
Anand Teltumbde, a well-known author and columnist, was arrested last year on April 14 under trumped up charges for merely questioning the power and standing up for the poor and marginalized.
Read more 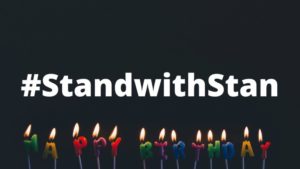 Fr Stan Swamy SJ celebrates his 84th birthday on 26 April. This year we want to let him know he is not forgotten.
Fr Stan Swamy SJ is an 83-year-old priest and human rights activist who has spent his life working for the poorest and most marginalised people in India. The Indian government has pursued a campaign of harassment against Fr Stan and other human rights activists in recent years …
Please join us in sending him a message of hope and solidarity this Easter. The card can be very simple or even a piece of folded paper.
Read more

“They are the sisters of Pritilata.
And the brothers of Bhagat Singh.
FREEDOM TO BK-16″

A protracted war of resistance appears to be unfolding on the border of Delhi, whee protesting farmers have intensified their struggle against the three agricultural laws. A massive tractor march was planned as a precursor to a similar rally on the Republic Day. Farmers are being mobilized under the guidance of the Bharatiya Kisan Union (Ugrahan) and other organisations in Haryana, Madhya Pradesh and Rajasthan.
Read more 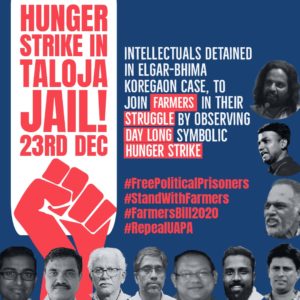 Three other accused in the case, Sudha Bharadwaj, Jyoti Jagtap and Shoma Sen, are lodged separately at Byculla women’s jail.
To show solidarity with protesting farmers, some of the arrested accused in the Elgaar Parishad case who are lodged at Taloja Central Jail observed a day-long symbolic hunger strike on Wednesday.
The accused, including Mahesh Raut, Anand Teltumbde, Surendra Gadling, Hany Babu, Sagar Gorkhe, Ramesh Gaichor, Arun Ferreira, Vernon Gonsalves and Rona Wilson, said in a statement issued through their lawyers that since they cannot join the farmers on the ground, they want to show solidarity with their cause through a hunger strike on December 23, which is observed as National Farmers’ Day.
Read more

A silent protest to express solidarity with Fr Stan Swamy demanding his release from jail led by Catholic Sabha, Kasargod deanery was held on the afternoon of Sunday, January 3 at Seethangoli and Uppala junctions.
Read more